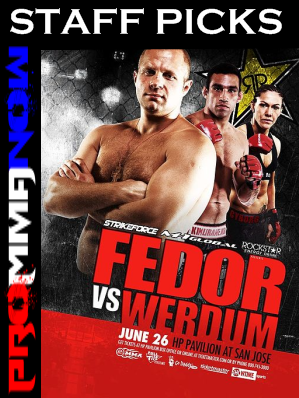 “Strikeforce: Fedor vs. Werdum” takes place Saturday, June 26, 2010, at the HP Pavilion in San Jose, Calif. Headlining the event, which will air live beginning at 10:00 p.m. ET/PT on Showtime, is a bout between the consensus world’s number one heavyweight MMA fighter Fedor Emelianenko (31-1-0, 1 NC) and the 2009 ADCC world grappling champion Fabricio Werdum (13-4-1).

The MMA world waits with great anticipation to see if Werdum will be the one fighter to finally legitimately defeat the legend. With each new fight, as each year passes, the mixed martial arts world wonders if the law of numbers and odds will finally catch up with “The Last Emperor.”

Also fighting on the card is the world’s number one 145 lbs. female fighter Cristiane “Cyborg” Santos (9-1). She will be taking on Jan “Cuddles” Finney (8-7) who is on a four fight win streak. Scott Smith (17-6) and Cung Le (6-1) will have a rematch from their Dec. 2009 war that ended with Cung Le being knocked out for the first time in his career.

Rounding out the televised card is a match-up between former Strikeforce lightweight champion Josh “The Punk” Thomson (16-3-0, 1 NC) and IFL veteran and current MFC welterweight champion Pat Healy (23-15). Thomson has his eyes on a rematch with current 155 lbs. champion Gilbert Melendez if he can get through Healy.

The ProMMAnow.com staff has come together once again to give their predictions on each of these “Strikeforce: Fedor vs. Werdum” televised main card fights. Let us know if you agree or disagree with our picks and post your predictions and thoughts on the match-ups too. We want to hear from you! 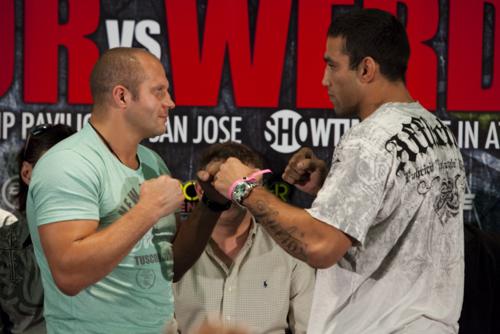 DENNY HODGE: There could be some major shakeups in the HW rankings with Fedor, Lesnar, and Carwin all in action in the coming weeks.  “The Last Emperor” will be facing top 10 competition when he steps into the cage with Werdum, who is a stud on the ground, and has shown improvement in his stand up as well.  Unfortunately for Werdum, the only time this fight will hit the ground is when he is added to Fedor’s list of KO’d opponents.  Fedor by knockout.

BRIAN FURBY: Fedor wins by decapitation.  OK, maybe not decapitation, but seriously, Fedor can win this fight by any means he would like.  I have no doubt he could even submit Werdum if he wanted to.  However, it will probably end up with Fedor winning by TKO early in the second.  Werdum will be elusive enough to survive the first round, but barely, and then make a mistake of trying to move in on Fedor early in the second to throw him off and that will not go well.  Fedor wins by TKO in Round 2.

RICHARD MANN: I have seen Fedor hold his own against Nogueira and carve up other respectable fighters on the ground. However, I have also seen him nearly get his arm ripped off by Mark Hunt. I am going to pick Werdum to win, but most because I want to be able to say “I told you so” whenever Fedor loses. Werdum by submission.

JACK BRATCHER: After Werdum got knocked out by Junior dos Santos at UFC 90, the UFC sent him packing. In the past, Werdum lost decisions to Arlovski and Nogueira, both whom Fedor defeated. Werdum is brilliant with his jiu-jitsu and last year’s Abu Dhabi champion, but Fedor it seems is un-submittable. His stand-up is much too fast and powerful for Werdum. From recent footage I’ve seen, Fedor looks to be in great shape. He seems mentally ready, not that that has ever been a problem for him. And I just don’t see Werdum offering anything that will pose a serious threat. Not to mention, Fedor has brought his wife to watch him for the first time fight in America. It’s not a question if Fedor will win, but how and when. Fedor hasn’t let a fight go to decision in nearly five years. I’m going with a first round knockout via “The Last Emperor”. 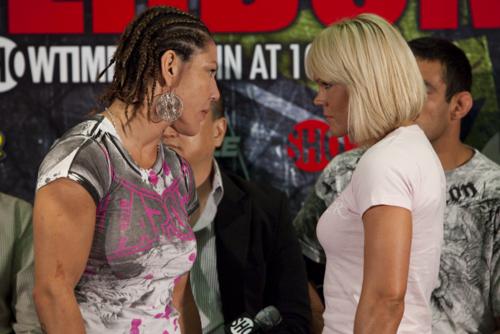 DENNY HODGE: Finney may be 8-7 but she has fought top notch competition and taken them into deep waters.  She will survive the initial onslaught of “Cyborg” and survive into the later round, but in the end “Cyborg” will be too much for her, defending her title by unanimous decision.

BRIAN FURBY: Cyborg vs. Cuddles.  What an awful nickname for a fighter, regardless of how cuddly Jan Finney allegedly may be.  I’d like to root for Finney as the underdog, but the harsh reality is that nearly every time she has faced top-level competition, she has failed.  Granted, four of her seven losses were decision losses, so she isn’t extremely easy to finish, but Cyborg is just that – a Cyborg.  Continually moving forward with one objective in mind – win.   And win she will, but not too easily.  Finney is coming in on a four-fight win streak, and a lot of hype behind her and I think these two tough women will put on a great show for the fans that sees Cyborg on the winning end of a TKO victory late in the second.  Cyborg wins by TKO in Round 2.

RICHARD MANN: Jan Finney is a great fighter. However, Jan Finney is not a 145-pound fighter. Let’s hope that Strikeforce finds people to challenge for Cyborg’s title that are actually in the right weight class. Santos by TKO.

JACK BRATCHER: Ah, the 8-7, 4 knockout, 1 submission, 3 decision, Jan “Cuddles” Finney… She’s a looker but the “Cyborg” (she calls her husband “Cyborg” – that’s just awesome) is going to treat her like a hot mess. On paper it seems Finney has improved since her four losses in a row and has come back to win her last four fights against some lesser named opponents. People have questioned why Finney is even being given this shot against the Strikeforce 145 lbs. women’s champion, and I’m one of those people. Cyborg is much too explosive, much too strong, athletic and fast for pretty much everyone. It’s very fitting that she is fighting in the co-main event under Fedor. If he’s “The Last Emperor”, Cyborg is “The Last Empress”. Cyborg has knocked out her last three opponents… Marloes Coenen, Gina Carano, Hitomi Akano, and Finney will be the fourth. Cyborgs do not get tired, they don’t slow down. Her pressure, pace, and power is going to pulverize Finney and leave “Cuddles” in a bloody hot mess puddle. Cris Santos by first round thrashing. 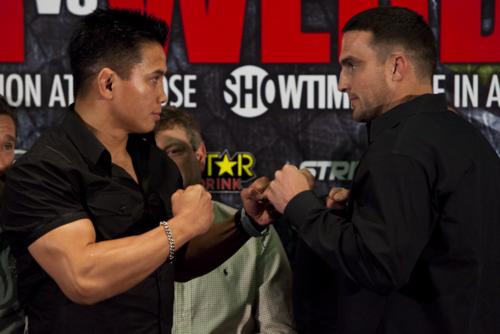 DENNY HODGE: Who could ever forget the first fight between these two???  Le had Smith on the verge of leaving the cage on his shield, but in true “Hands of Steel” fashion, Smith proved that he is NEVER out of a fight, regardless of how bad he’s been beaten up until the point that he lands that big punch.  Le was unable to put Smith away the first time, but he’ll finish the job this time after re-focusing on his fighting career.  Le by TKO.

BRIAN FURBY: I expect this fight to go a lot like the last one, except Cung Le will win this one.  Smith will get beat up for the vast majority of the fight, but Le learned his lesson last time to not count Smith out until he’s truly down and Le will put him down with some of his crazy kicks that critics said would never work in MMA and some crisp striking.  This is the only fight out of these four where the odds are relatively close, and Smith and Le will put on another entertaining performance, but Le will win this one, setting up the inevitable rubber match.  Cung Le wins by TKO in Round 3.

RICHARD MANN: I would say that lightning can’t strike twice, but it happens for Scott Smith all the time. The prediction should say that Smith will channel his inner Team USA and land a late shot. However, Cung Le will keep his distance and take home the decision. Le by decision.

JACK BRATCHER:  Let’s face it, Scott Smith is a tough sonofabitch. In their first fight, Le put Smith through a live on-the-spot audition for his new kung-fu movie. The only problem was, Le forgot to tell Smith he was supposed to lose. After Le got finished with all of his spinning and kicking and punching, Smith knocked Le out cold for the first time in his life. He had never lost a fight, much less been KO’d. How will he bounce back from that? It was really his first loss EVER. Even in his Sanshou and K-1 kickboxing days he never lost. So, will he be able to mentally get past the knockout? What has he been doing since then to correct his mistakes? If I remember correctly, he began to tire out in the third round. So for his sake, hopefully he’s improved the cardio. Smith is much much more experienced than Le in MMA. However, that matters little when Smith’s game plan is always to stand and strike which Cung Le has been doing his whole life. Cung had been doing movies and had a very lengthy layoff before their previous fight. I don’t think he was in the right condition, and he has said as such in recent interviews. I think this time he will come in well-prepared and finish the job he tried to do the first time. I’m picking Le by decision. Word has it that if Le wins, Smith will get a rematch. So, who wants to see Smith vs. Le for a third time? 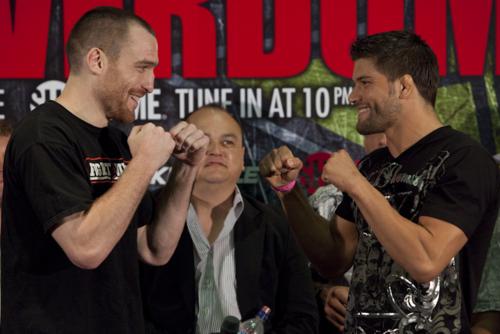 DENNY HODGE: Pat Healy is a very experienced guy that never goes away, seeming to always work through adversity, forcing his opponent’s will to win.  Thomson will have an advantage on the feet and will prove to be too explosive and fast for Healy, as both guys scramble for position when the fight hits the ground.  Thomson by decision.

BRIAN FURBY: Thomson is a heavy favorite in this fight, and with good reason.  He is a more well-rounded fighter than Healy, has done better against higher-level competition, and is ready to work his way back up the lightweight ladder to a title shot.  Look for Thomson to dominate Healy in all aspects of the fight before locking on a fight-ending submission towards the end of the first round.  Thomson wins by submission in Round 1.

RICHARD MANN: Healy is a tough and scrappy fighter. Thomson should have a pretty solid advantage in the striking game. Look for Thomson to put punches together on the feet and dominate the majority of the fight. Thomson by decision.

JACK BRATCHER: The former Strikeforce lightweight champion Josh Thomson had some terrible luck prior to losing the title to Gilbert Melendez in his last fight back in December. He had broken his leg and had quite a bit of trouble with it healing. A healthy 100% Josh Thomson is a tough fight for anyone. Pat Healy is extremely experienced and has been in the cage with the sport’s best, and has beat a lot of them. This could be fight of the night. I expect a war and closer than some might expect, but in the end, I think Thomson will get the decision.

[All photos by Esther Lin/Strikeforce]