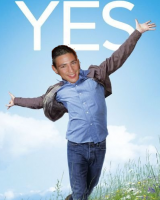 Another reason is because of the time he joined forces with Dan Quinn in the Stevia crusade and “legitimized” Quinn’s efforts by declaring to the world Stevia had disintegrated a lump in Sonoma’s breast.

Finally, Sanchez has been credited with the invention of the “Yes! Cartwheel.” Hey, don’t knock it til’ you’ve tried it. For all we know, they could be teaching “Yes! Cartwheels” in high school P.E. classes all around the country 50 years from now. Sanchez is the real life “Yes Man!”