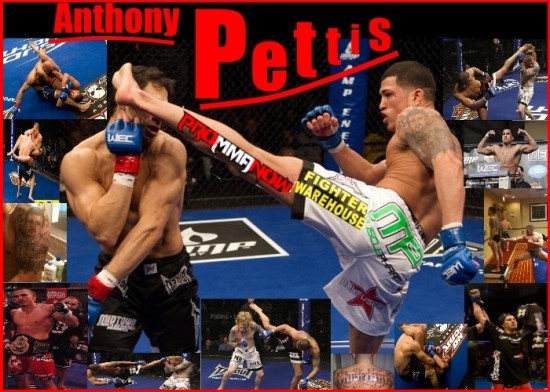 As World Extreme Cagefighting prepares for “WEC 48: Aldo vs. Faber“, it’s very first pay-per-view card, this Saturday night in Sacramento, Calif., Anthony “Showtime” Pettis (9-1) is gearing up for his fourth fight inside the Zuffa-owned promotion.

Pettis, a 23-year-old well-rounded fighter out of the Duke Roufus camp, has won two of his three fights in the WEC. In his most recent bout, at WEC 47 in March, he knocked out Team Alpha Male’s Danny Castillo (8-3) in the first round.  This Saturday night Pettis will face UFC and WEC veteran Alex Karalexis (10-4).

ProMMAnow.com talked with Pettis this week about his upcoming fight, and to get his opinion on the 32-year-old Karalexis, who has been fighting professionally for over seven years. Pettis responded to some things Karalexis had said about him in the media, and spoke specifically about one of the holes he sees in his game. We also got the lightweight’s thoughts on Zuffa potentially merging the WEC 155 lbs. weight division into the UFC. It’s “Showtime!”

ProMMAnow.com: Anthony, thank you for speaking with us at ProMMAnow.com. How are you feeling now just a few days away from your fight; how was your camp and how’s your weight?

ANTHONY PETTIS: No problem, I’m feeling great and my weight is right on point.

ProMMAnow.com: You are fighting Alex Karalexis this Saturday night at WEC 48. It’s kind of interesting the last loss on both your records came from the same person, Bart Palaszewski , even though your fight was much closer. Did you feel you won the fight against Palaszewski at WEC 45?

ANTHONY PETTIS: The fight between me and Bart was really close. I feel I won that fight but it’s my fault for letting it go to the judges. I wasn’t my self in that fight but the loss changed me as a fighter!

ProMMAnow.com: Where do you see Karalexis having the biggest advantage, where do you feel he is most dangerous?

ANTHONY PETTIS: Alex is most dangerous when he backs someone up. He has a really big right hand and is pretty strong guy.

ProMMAnow.com: You have stated you see some holes in his game. Could you talk about that a little, what do you see that you may be able to exploit?

ANTHONY PETTIS: Alex has a lot of holes in his game. He really hasn’t changed much as a fighter since “The Ultimate Fighter” show. He is a sucker for head kicks and I’m a really good head kicker.

ProMMAnow.com: I was reading this quote from Karalexis about you where he was comparing your fighting style to his. He said: “If we were kids and there was a beehive hanging on your house or something like that, Anthony Pettis is the kind of kid that runs up to it, throws a rock at it and runs away. He comes back five minutes later, throws another rock at it and runs away. I’m the kind of guy that grabs a garden hose and stands right underneath the beehive and just sprays the thing down, doesn’t move. I think that explains our personalities and styles.” How would you respond to that?

ANTHONY PETTIS: What happens to the kid that sits under the bee hive with a garden hose? He gets stung by the bees and ends up in the hospital looking like a dumb ass.

ProMMAnow.com: Karalexis seems to think if he lets you move in and out and control the range you will be dangerous, but if he can get in your face and turn it into a fight, that’ is where you are most vulnerable. Would you agree with that? Why or why not?

ANTHONY PETTIS: I think if he gets in my face and makes it a fight he’s gonna wake up on his back and think it was a bad idea! I can fight anywhere and he can’t.

ProMMAnow.com: What would a win over Karalexis mean to you personally, and how much closer would that move you to a title shot?

ANTHONY PETTIS: A win over Karalexis would put me one step closer to a title shot and a main card fighter.

ProMMAnow.com: I know you really want that title shot. How do you see the Cerrone vs. Henderson fight going, and how do you think you match up with those guys?

ANTHONY PETTIS: I really don’t care who wins. I would match up great with either of them.

ProMMAnow.com: There’s talk of merging the WEC lightweights into the UFC. Do you like that idea, and what do you think about Frankie Edgar as UFC champ, did you feel he won that fight? Would you like to fight those guys one day?

ANTHONY PETTIS: I think it is a great idea. I wanna be the best fighter in the world and that would really give me a chance to prove it. Frankie Edgar is a great fighter and it was a close fight.

ProMMAnow.com: Thank you Anthony. Best of luck in your fight this weekend. Is there anyone you want to thank, or send any shout outs?