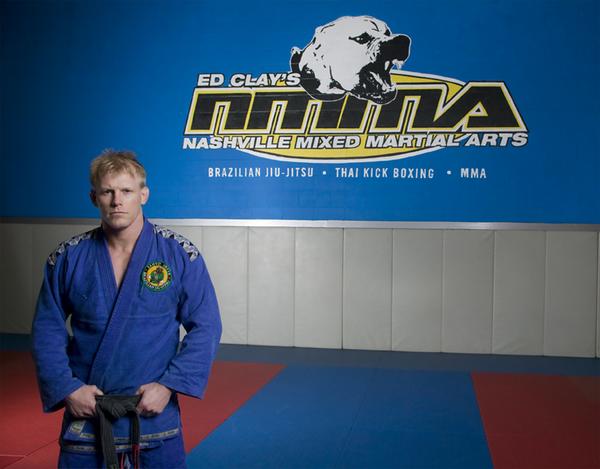 Only Nashville could produce someone like Shawn Hammonds. Aside from being a BJJ black belt, a Pan American grappling champion, and a Brazilian Jiu-Jitsu instructor at Nashville MMA, Shawn is also a successful country music recording artist with Country Thunder Records. After years of grappling competitions and teaching jiu-jitsu, he will  make  his pro MMA debut at “Gameness Fighting Championship VI” this Saturday night at the Tennessee State Fairgrounds.

Pro MMA Now (www.prommanow.com) spoke with Shawn this week to learn more about his story, his accomplishments in grappling and music, and find out why with two successful careers already, he wanted to compete in MMA. You’ve never met a fighter like this.

Hi Shawn, thank you for taking the time to speak with us at Pro MMA Now (www.prommanow.com). You have a big fight coming up this weekend at “GFC 6” in Nashville. How excited are you to make your pro debut here in your hometown with all your friends, family, students, and coaches there to watch?
Real excited, to have the support of my friends and student is huge.

Are you feeling much pressure because all your friends and family will be there, or does it make it easier to have them there as support?
No pressure, I’ve been competing for a long time and I am very good at preparing myself mentally.

For those who don’t know, you are the BJJ coach at Nashville MMA. How long have you been teaching there and how did you get hooked up with Ed Clay?
I have been teaching Bjj since 2003 here. I met Ed Clay when he was 16 years old, I taught him his 1st armbar and introduced him to Bjj.

Oh wow, I did not know that. How did you first get involved with jiu-jitsu, where have you studied, and tell us a little about your accomplishments in grappling please.
I got involved when i saw an old UFC film with Royce Gracie submitting everyone in UFC 1 and 2 and was very interested in how he beat the bigger opponents so easy, it was 1998 when I saw it. I had a friend who was involved in other styles of martial arts and he knew a guy who trained in Bjj and hooked me up with him, that was in Kentucky where I was from, so I would go home to visit my family in Kentucky and learn from him and then come back to Nashville and teach Ed Clay, and then found Eric Silver who was a blue belt under Rickson Gracie here in Nashville. Accomplishments: I am a three-time Pan American medalist as a black belt and Pan American champion also, won several pro submission competitions and several other local events.

Now this is your pro debut in MMA this weekend. How long have you been thinking about making the jump to MMA, how long have you been training your stand up and wrestling game, and what would you like to accomplish in MMA?
I really never thought about fighting until Ed asked me if I wanted to fight pro on his pro/am show and I thought I’m not getting any younger, might as well give it a shot. Haven’t done stand up in six years, so it’s a bit rusty, but I’ve been doing BJJ, wrestling for 11 1/2 years. I just want to win one fight at a time.

How much do you know about your opponent Daniel Vizcaya? And how do you think you match up with him from what you know?
He looks tough, the match up is great, now we will see what happens.

Now, aside from your martial arts career, you are very involved in a whole other career. Could you tell our readers what that is, please?
I moved to Nashville for the music industry, I love traditional country music and that’s what I like to sing.

How did you get involved with music, how long have you been singing, and how often do you perform?
My grandfather and father were both singers and musicians. I started playing drums and singing at the age of five, grew up on George Jones and bluegrass music. I got a record deal with Country Thunder Records in 2008, and have gotten to share the stage with artists like, Alan Jackson, Sugarland, Heidi Newfield, etc. Right now I will perform about 30 to 40 shows this year.

That’s amazing. Is it difficult juggling a music career and your athletic career, how do you make that work. And secondly, do your two careers help each other in any way?
At first when I got my record deal I was really busy with radio tours so it conflicted with my training, but now that it’s slowed down it’s a lot easier. MMA and jiu-jitsu is a great talking point in the music business.

Well Shawn, I think you have a great story. I love seeing fighters who are accomplished in other areas as well, and we really look forward to your MMA debut this weekend. Best of luck to you. Is there anyone you would like to thank, any sponsors or anyone? Or do you have any shout outs?
I would like to thank you guys at Pro MMA Now for the interest in my career, thank Gameness, Outlaw Wear, all my students and coaches, and my beautiful wife for her support.

You can listen to Shawn Hammonds’ music at www.myspace.com/shawnhammonds101