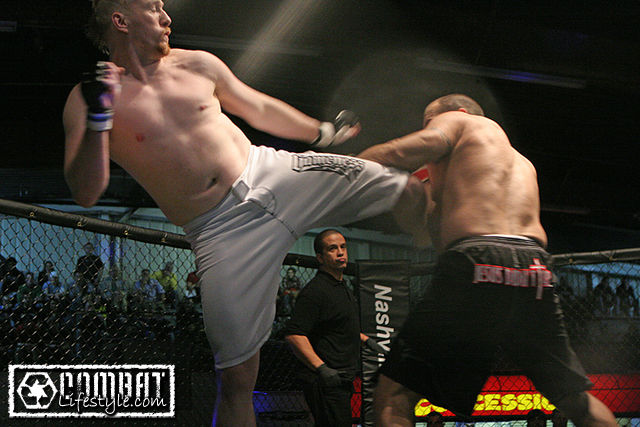 This weekend Gameness Fighting Championship returns to the Tennessee State Fairgrounds Sports Arena in Nashville, Tenn with “GFC 6”. Fighting in the main event is UFC veteran and hometown hero Josh “The Warhammer” Schockman. Pro MMA Now (www.prommanow.com) caught up with “The Warhammer” this week to see how things have been going, get his thoughts on his opponent, talk about his training, the growth of MMA in Tennessee, and find out how it feels to be headlining the biggest locally-promoted fight card Nashville has ever seen.

Hi Josh, thank you for taking the time to speak with us at Pro MMA Now (www.prommanow.com). How are things with the Warhammer these days?
Well you know I’m never to busy to talk to the good people at Pro MMA Now, things are going all too well for me. I’ve got my gym, Nemesis MMA, I’m feeling healthy, and training hard, so I’m great these days.

Who is this cat Reed Cook you are fighting on Saturday, how much do you know about him, and have you seen him fight? Do you think he’ll stand with you?
Ah yes, Reed Cook… well, I don’t know much about him. I do know that they are going to put him in a cage with me, lock the door, and pay me to kick his teeth in. As far as him standing with me, I don’t think he has much of a choice, I’ve been training my takedown defense a lot so… not going to the ground unless I want it to.

If you were coaching Reed Cook to fight Josh Schockman, what advice would you give him for this fight?
I would probably advise him to make sure he has a good insurance policy with a low deductible. Then I would tell him to keep running until the bell rings.

(laughs) Nice. This is the biggest fight card Gameness has put on. How does it feel to be able to headline a show of this caliber, with so many great fighters, right there in your home town?
It feels good to be back in front of the Nashville fans. I love fighting at home. This card is going to be amazing, It looks like Ed Clay and the gang have done it again. First they got the sport legalized and now they are putting on the biggest show that the city has ever seen. It’s going to be better than when the UFC came to town I’m sure. Not only am I the main event but there are going to be many great up and comers on the card. These fights will be amazing, I guarantee it.

How much have you been training with Dave Herman, and how have you guys benefited each other’s training now that he is in Nashville?
Dave has been training with me quite a bit actually. I think the move to Ed’s camp is the best thing he ever did with his career. His stand up has improved 1000% since he came. Working with Ed, me, and my boxing coach Jeff Thomas has made all the difference in the world. I like having Dave as a sparring partner, the better he gets the better I get, so it’s been good.

Did you get to work with Rhadi Ferguson when he was in town? If so, how was that, and what do you think about him making the move to MMA?
I did not get to work with Rhadi as much as I would have liked to, but I did spar with him a bit and he was at my gym briefly. He had to go back to Florida earlier than expected, but he will be coming back to train with me some more in the near future. I actually got to train with Rhadi back in ’06 down in Florida. I went down there on several occasions to train with Jeff Monson and that’s where I met Rhadi. I told him he should be fighting back then and here we are four years later. I think it’s great, I’ll be glad to have him coming in to work out with us. He brings a lot of knowledge and an intense work ethic. Most importantly, he says funny stuff and talks bad to people, which makes him hilarious. I’ll be happy to have him around.

It seems like Tennessee is starting to get more and more big events here. How cool is it to see the growth of MMA in the state and especially around middle Tennessee?
As far as the sport’s growth around here, I love it. Ever since that stupid tough man law past that’s all Ed and I talked about was making it legal here again. After a lot of time and hard work Ed finally got it done and it’s been great. One thing I’ve noticed though is a lot of people trying to ride Ed’s coat tails and not give him credit. They wanna throw fight shows and put up fight schools and talk bad about him. All I can say is don’t be mad at success kids.

Can you notice an increase in people walking into Nemesis wanting to train and be fighters these days – has it increased over the years? How long has your school been open?
As far as my school Nemesis MMA is concerned, I’ve been teaching there for about two years. I love my students and that school. It’s my favorite place to train, all the people there are really close and it’s a great school. We have a lot of fun there and get a lot of good training in there. I have noticed more and more people coming in and wanting to fight, but most of ’em don’t last long. Fighting is a tough gig and its not for everyone.

What can we expect out of the Warhammer in the future – what sort of goals are you working toward?
Now that I’m healthy you can expect me to be a lot more active. I’m doing nothing but getting better, I’m still learning and growing as a fighter. I’m not at my peak yet by any means so you can expect to see a lot more out of me for sure.

Would you like to send a message to your opponent if he reads this?
Happy belated Valentines Day!!!

(laughs) Awww, that’s sweet, I’m sure he really appreciates that! Thanks Josh for speaking with us at Pro MMA Now. Is there anyone you want to thank, or do you want to send any shout outs?
Like to say thank you to Gameness, my only sponsor for this fight since Mike Camp didn’t get me any sponsors. Like to say I love you to my wife, my daughter, all the Schockmans and all the Brasils. Also like to say thank you Jack for taking the time to interrogate me.