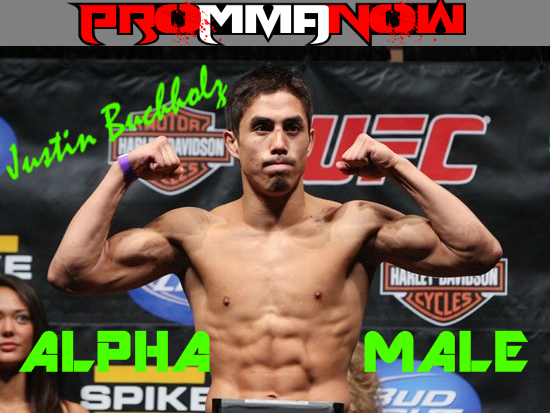 In this UFC 109 spotlight, we are focusing on Alaskan born, Team Alpha Male lightweight fighter, Justin Buchholz (8-4). Now 26-years-old, Justin has been fighting professionally since Feb. 2005, when he won his first pro MMA fight by submission at Alaska Fighting Championship 8. Since that time, Justin has gone on to win the  Alaska Fighting Championship Lightweight Title, the ICON Sport Lightweight Title, and earn a spot on the UFC lightweight roster.

With a record of 7-1, Justin had his first fight in the UFC Octagon in Jan. 2008 against  Matt “Handsome” Wiman at Fight Night 12. Unfortunately for Justin, he lost that fight via first round rear-naked choke. In his next fight, he bounced back with a rear-naked choke of his own, and tapped out Corey Hill at UFC 86. Following that, he lost to Terry Etim at UFC 99 via submission, and then lost to Jeremy Stephens via TKO at UFC Fight Night 19.

Now with two losses in a row, Justin finds himself in a sticky situation. This Saturday night he will face The Ultimate Fighter 6 winner, Mac Danzig, and if Justin loses, chances are he could get a phone call from the UFC brass notifying him he has been released from his contract. Pro MMA Now (www.prommanow.com) spoke to Justin on Tuesday about how much pressure he was under for this fight, his opinion on Danzig, how the two match up, and he even had some dietary advice for his opponent. Finally, Justin let us in on what type of fighter it is going to take to knock UFC lightweight champ B.J. Penn off his pedestal.

PRO MMA NOW: Thank you Justin for taking the time to speak with us at Pro MMA Now (www.prommanow.com). How did your camp go for this fight and how are you feeling in these final days leading up to your fight with Mac Danzig at UFC 109 this Saturday night?
JUSTIN BUCHHOLZ: My camp went great, I’m back in the gym days after I fight so I don’t really take any breaks. I’ve made it my lifestyle so I don’t really do camps but my peaking has been great!

PRO MMA NOW: Where do you train Justin and who are your coaches and training partners who helped you get ready for this fight?
JUSTIN BUCHHOLZ: I train in Sacramento, California with Team Alpha Male with Urijah faber, Joseph Benavidez, Danny Castillio, Chad Mendes, and an army of guys you will soon hear about! My coaches are Master Thong and Fabio Prado.

PRO MMA NOW: What is your opinion of Mac Danzig and how do you see yourself matching up with him?
JUSTIN BUCHHOLZ: He is a tough fighter with a lot of experience and heart. I think the match up couldn’t be better for me and I’m very excited to mix it up with him.

PRO MMA NOW: How important is this fight for both of you guys – with Danzig losing his last three fights, and you with your last two?
JUSTIN BUCHHOLZ: Every fight is your most important fight, It doesn’t matter if you’re coming off three wins or three losses, the pressure is the same.

PRO MMA NOW: As you know a lot of guys have been let go after a couple of losses. Why do you think they haven’t let Danzig go after three straight losses?
JUSTIN BUCHHOLZ: Danzig won TUF so of course they don’t want to bail out on their investment. Plus he puts on good fights which is most important to the UFC. That’s why they keep me around (laughs).

PRO MMA NOW: With the UFC lightweight division being so incredibly stacked right now and with B.J. Penn dominating, what type of fighter is it going to take to first of all, get to that number one contender spot, and then defeat B.J.?
JUSTIN BUCHHOLZ: It’s gonna take a fighter who believes in himself and has the dedication and talent to match.

PRO MMA NOW: Can you give us a prediction on how your fight with Mac Danzig is going to end at UFC 109?
JUSTIN BUCHHOLZ: It’s gonna be a great fight and I’m going for a KO.

PRO MMA NOW: If you were Mac Danzig’s coach for this fight, what advice would you give him against Justin Buchholz?
JUSTIN BUCHHOLZ: I would say Mac it’s the wrong time to fight this guy, these loses have made him ten times the fighter he was, this is gonna be the start of a long win steak for him, damn lets try adding red meat to your diet or something, we gotta try something!

PRO MMA NOW: Thank you for your time Justin and we wish you the best of luck. Do you want to thank any sponsors or send any shout outs?
JUSTIN BUCHHOLZ: Tapout, Results Ultimate Fitness, Team Alpha Male, and all my buddies back in Fairbanks, Alaska and Hawaii.