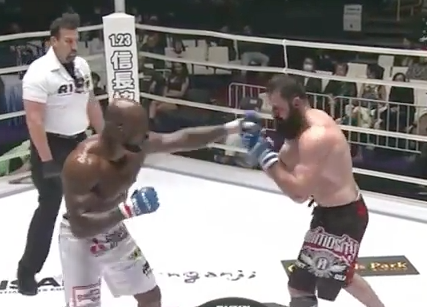 King Mo advanced in the RIZIN Heavyweight Tournament Tuesday in Japan with a knockout win over former rugby player Brett McDermott 9:20 into the 10-minute battle. Mo used his wrestling and ground-and-pound to wear the Englishman down, then finished him off with big punches on the feet. Mo moves on to the semifinals, and possibly … Read more

Join Brian and guest co-host Jack Bratcher this evening for the newest episode of The Cageside Beat, the official radio show of Pro MMA Now. Brian and Jack will be joined by undefeated Strikeforce Light Heavyweight Champion Muhammed “King Mo” Lawal. This is episode is sponsored by On Point Athletics, makers of the new Baby … Read more

Matt De La Rosa and “Fast” Eddie Constantine returned to the PRO MMA (promma.info) radio network along with guests Brian Caraway and King Mo. Caraway (10-3) returns to action for the first time in 2009 this Friday at Strikeforce: Challengers in Kent, Washington against Alex Zuniga (2-1). The Strikeforce and Elite XC veteran talked about … Read more 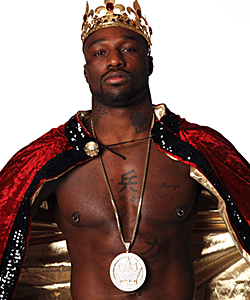 Muhammed Lawal, affectionately known as “King Mo” is coming off his second win in five weeks after defeating Chute Boxe fighter, Fabio Silva at Sengoku 6 in Saitama, Japan on Saturday.  King Mo is now 2-0 while his two opponents have over eighty fights between them. The King  walked through his opponents while maintaining control … Read more

Muhammad Lawal wasted no time racking up his second TKO victory only five short weeks after making his pro debut. “King Mo” finished Fabio Silva in the opening moments of the third round at Sengoku 6 and in turn took another step en route to becoming a top prospect at 205.

He won his first MMA bout by finishing Travis Wiuff with vicious ground and pound at the two minute eleven second mark at Sengoku 5. Rafael “Feijao” and Thiago Silva may be two of the hottest prospects at light heavyweight; however, Lawal is starting to make noise in this division.

Being on Team Quest puts Lawal on the fast track toward improving upon his natural ability. Under the tutelage of Dan Henderson, Lawal’s skill set will excel leaps and bounds. Wrestlers tend to come into MMA with the best starting base for a fighter.

World Victory Road’s Sengoku 6 took place on November 1st at the Saitama Super Arena in Saitama, Japan and featured the conclusion of its lightweight and middleweight grand prix.

Not part of the grand prix but serving as definite highlights of the card were “King Mo” Muhammad Lawal and brother of UFC interim HW Champ, Antonio Rogerio Nogueira.