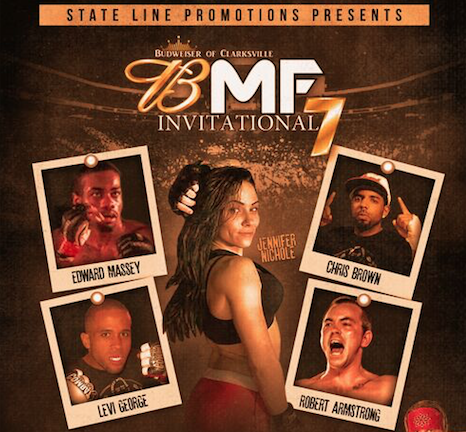 Come out and support local mixed martial arts as State Line Promotions presents BMF Invitational 7 on Saturday, Oct. 3, from Appleton Harley-Davidson in Clarksville, Tenn. This will be an all-ammy showcase with eight Annual Harley-Davidson sponsored championships on the line. Winners will get a custom made title and their name will go up on a plaque in the … Read more

This edition of PRO MMA’s Amateur Spotlight shines upon a young 22-year-old up-and-coming fighter out of Rancho Cucamonga, Calif. named Jamar Ocampo. He is a morning BJJ instructor at Millennia MMA and an accomplished grappler under Javier Vazquez.

Since there is no amateur MMA in the Golden State, Jamar gained the majority of his combat experience in grappling competitions and Pankration tournaments all over Southern California. His current Pankration record is 10-1. Jamar had one full-fledged amateur MMA bout in Idaho and choked out his opponent in 52 seconds. His professional debut is set for September in King of the Cage.

Yarovoy, who is Ryan Couture’s former training and sparring partner, improved his amateur MMA record to 2-1 and gained the Fight Night Entertainment Lightweight Title in the process. Couture’s amateur record now stands at 2-1.

Ryan Couture, 26, made his amateur MMA debut in November 2008 at Fight Night 1, winning via first round submission (Triangle Choke) over Ricky Perez.

The 135 lb title fight is a rematch for the two fighters, with Mike Pedro winning the first contest via 1st round armbar. Undefeated 145 lb up-and-comer Brandon Visher will look to push his record to 5-0 against game opponent Reuben Del Rosario. Colin Mackenzie will square off against Isaiah Cobb-Adams with both fighters searching for their first victories. Rounding out the PRO MMA bouts will Be Gene Gregory and Brysen Hansen. Looking forward to an action packed night with lots of local talent being showcase.

by: Jack Bratcher I want to introduce you to a young man who is making waves in the Mixed Martial Arts world in more ways than one.  Billy “24-7” MacDonald is one of the hardcore crew over at Tagg Radio. Just like myself and everyone else associated with ProMMA.info,  you can find Billy hanging out … Read more