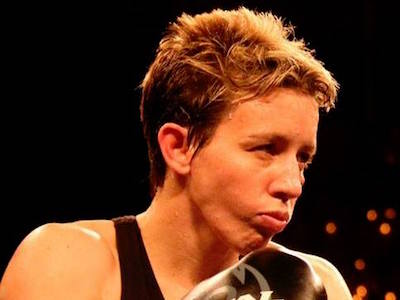 Layla McCarter today stands as one of the best pound for pound female boxers on the planet. The multiple-time world champion has managed to create a muscular record of 39-13 in an amazing career of over 19 years. Ahead of a possible major matchup against undefeated world welterweight champion, Cecilia Braekhus, she took time out to answer a few of our questions.

How did your journey as an athlete begin? Was there someone who influenced or inspired you? When you look behind and realize that this is how far you have made, how does it feel?

I was born athletic and with a lot of energy; did gymnastics and swimming as a young child and every sport possible growing up. My brother Pete influenced me by encouraging my athleticism. He and my mother both inspired me to do whatever made me happy and to work hard.

It has been a very long journey. I feel proud of everything I’ve achieved in boxing and grateful for the experiences I’ve been blessed with.

What according to you is your greatest achievement?

My greatest achievement is growing up and learning how to be a better person. Most of my personal growth couldn’t have happened without the positive influence Luis Tapia has had on my life. He is my manager, trainer, teacher, best friend and role model. Over the past 19 years we have had many great moments, my favorites being: winning my first world title at age 21 vs Sandra Yard, defeating previously unbeaten Fujin Raika in Japan, victory #1 vs Jelena Mrdjenovich when she was undefeated, my third and final fight with Jelena Mrdjenovich successfully defending my WBA lightweight title in her hometown, & winning the WBA super-welterweight title against undefeated Noni Tenge in South Africa.

My mother was a geologist (also considered a man’s profession) and she later became a very successful businesswoman.  Thanks to her example and attitude, I never had limits on my dreams provided I was willing to work hard. My brother was also supportive of whatever I chose to do. They were not involved directly in my decision to make boxing my profession but they support me as always.

A big challenge has been to keep going despite the fact that at the top level there is little financial equity for a woman in boxing.

An opinion which comes out again and again is that combat sports aren’t meant for women. As someone who practices it and has many fans, what are your thoughts on the mentality of people who refuse to accept that women too can fight?

Everyone has the right to their opinions, whatever they may be based. The only thing I can do is keep being me. Some will refuse to see women boxing and put out disparaging remarks. I try to ignore them and continue being awesome

You have been a part of boxing for a long time. What are your thoughts on the evolution of women’s boxing?

The amateur program and the Olympics have created a new era of women’s boxing. For example, Katie Taylor of Ireland with over 250 amateur fights has turned pro, and with the support of promoter Eddie Hearn, has already been featured on big televised shows. Hopefully, it’s a sign of things to come.

Do you think that women boxers have cemented their spot in the main stream media?

Did you ever find it difficult to get recognition in the boxing world because of being a woman?

What do you think will be the challenges for the upcoming generation of women fighters?

It’s always the same challenges for a woman. Sometimes better or worse climates, but the struggle will always be there; within boxing and without.

Who do you think are the top 5 greatest women boxers of all time, women who have not only given exemplary performance in their fights but have also helped in the growth of the sport and have made it possible for women to have their place in some of the biggest boxing platforms available?

There are many fighters who contributed in their ways and I can’t name a top 5 but here are a few that made an impact: Christy Martin with her tenaciousness and promoter Don King who co-featured her on Tyson cards on big TV, inspired many women boxers to believe there was a place for us to go with boxing. Amanda Serrano has frequently been on televised shows and always performs. Aside from that, she is very active in social media making use of these platforms to increase visibility not only for her career but for us all. Lucia Rijker was a great kickboxer and undefeated boxer who captured the imagination of many with her ability to “fight like a man.” She was also fashionable with international appeal.  Laila Ali is an overall athlete and beauty who brought an audience to women’s boxing due mostly because of her father’s legacy. Katie Taylor will continue to blaze a trail for the next generation with her Olympic and professional career, an amazing fighter who is humble and classy and already has a huge following.

Professional boxing is notoriously known for being a negative sport. Time and again athletes have quit the sport because of the draining negativity the sport has around it. How did you survive it? What is your message for people who find it difficult to deal with all of this?

It comes with the territory but in my case I’m so invested that I must see it through to its natural end.  To survive I must refocus on my original love of boxing and transport myself back to the beginning. Life is hard. Make the decisions that will make you happy. Take it as far as you can.

How did you get your nickname?

My manager/trainer dubbed me “Amazing” at a press conference in Ignacio, Colorado where I was defending my IFBA featherweight title vs Jo Wyman. It was later printed in the paper and stuck. I like it.

You have faced some of the best fighters of all time; the list includes Mary Jo Sanders, Melissa Hernandez, Jelena Mrdjenovich and many more. Who are your top 5 opponents? What made them the best you have faced?

Tough question, I can’t name a top 5 but names that come to mind would be the three you mentioned plus Jo Wyman, Tracy Byrd, Alicia Ashley, Sandra Yard.

Professional boxers are known for padding up their records and facing opponents over which they have an advantage. You as a boxer have always faced the toughest one available? Why? Do you think you made the correct decision?

I fear no one and was willing to take chances to achieve greatness. I was never offered an alternative way and never had the support of a promoter but would do it all over again. It’s the warriors’ way!

You have been linked to a fight against welterweight world champion Cecilia Brækhus for a long time. Why isn’t the fight materializing?

Braekhus has never wanted to face me and the belt organizations have allowed her to continue picking lesser opposition despite my #1 rating over the past years because she is consistently fighting and paying the sanction fees. The IBF yesterday made it known that I am her mandatory defense and that if she does not fight me, they will strip her of their belt.  I applaud the IBF for making this statement and doing the right thing. It’s now up to our promoters to make it happen and Braekhus to accept.

Any message for Braekhus?

Let’s do this! The fight is way past due. To be the best, you must fight and defeat the best.  It’s always been my way and I look forward to the challenge.

You recently had a heated exchange of tweets with two time Olympic gold medalist Claressa Shields. What caused the beef?

It started when one Claressa’s fans said I need to show her some respect because she is the best pound for pound female boxer ever! While I’ve always showed support to all female boxers including Shields, I felt the need to clarify that Shields was a mere 2 fights into her professional career and that a P4P claim at this stage is not only ridiculous but disrespectful to all champions and former champions out there. Then, Shields tweeted many disrespectful things to me.  She’s young and I didn’t mean any disrespect, just the facts. I truly wish her the best as with every woman brave enough to be a boxer.

What do you plan on to follow once your boxing career is over? Do you have any retirement plans?

No plans as of yet.

Thank you all for the support! Especially to those in the media who have followed the sport and provided much needed spotlight. There are many, but special thanks to Sue Fox, David Avila, Mary Ann Owen and Caryn Tate. Thank you for this interview!