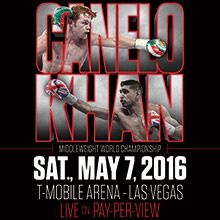 Saúl “Canelo” Álvarez will face Amir Khan on May 7, 2016 at the new T-Mobile Arena in Las Vegas for the Lineal, Ring and WBC Middleweight World Championship titles.

Now go behind-the-scenes in this first episode of 24/7 Canelo vs. Khan from HBO.

The event will mark Canelo’s first defense as the Lineal, Ring and WBC middleweight champion, and it will be Khan’s first fight at middleweight after moving up two weight divisions from welterweight. The fight will be contested at a catchweight of 155 pounds.