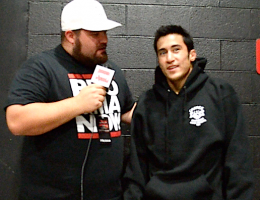 KNOXVILLE, Tenn. — Albuquerque-based bantamweight Joby Sanchez (4-1) made his XFC debut this past weekend at “XFC 20: High Octane” in Knoxville LIVE on AXStv after winning a contract with the promotion at their open tryouts earlier this year. Sanchez took on Cincinnati’s Chris Dunn (1-2) who fights out of Genocide MMA, and ended up submitting Dunn with a triangle choke at 1:49 of the first round.

ProMMAnow.com’s Gary Thomas caught up with Sanchez after the fight to get his thoughts on his performance and picking up a win in his first fight under the XFC banner. Sanchez said he felt his nerves got the better of him a little bit which allowed Dunn to score a takedown, but credits his instructors at Chavez Dojo in Albuqueque for his jiu-jitsu game which ultimately allowed him to pull off the submission.