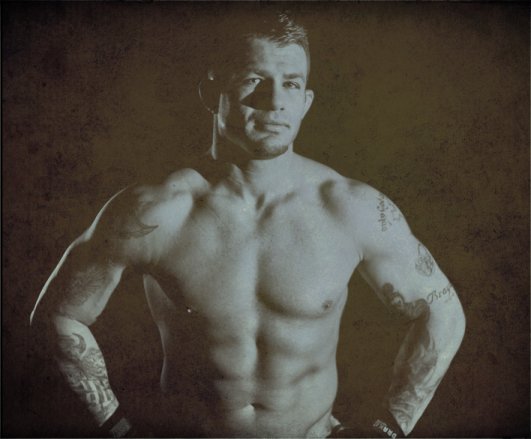 Ryan Chiappe (8-6-0 MMA) knows all about aggression. He calls it “controlled aggression,” and it’s what he has used to win four of his last five fights by way of (T)KO or submission, all in the very first round.

This Friday, Chiappe will be looking to extend that streak in his promotional debut at MFC 31 as he faces off against Cody Krahn (10-4-0 MMA).

Chiappe is more than excited to have not only the opportunity to make his MFC debut, but also to kick off the televised main card on HDNet, and his gameplan will be the same as it always is — finish the fight.

“You’re not going to see me dancing around for three rounds, that’s for sure,” Chiappe told ProMMAnow.com “That’s not really my game. But at the same time, I feel that my game has evolved, and I can see this fight going anywhere. I’m a finisher, so I’m always looking for the finish.”

ProMMAnow.com’s Denny Hodge caught up with Chiappe as he made his final weight cut preparing for Friday’s MFC 31 event, to talk about cutting weight, what fighting in the MFC means to him, and his thoughts on Twitter and social media in MMA:

PRO MMA NOW: You are just a couple of days out from making your MFC debut this Friday. I know you are in the last days of cutting weight, so I have to ask. How are you feeling right now? I know a lot of guys are not too social during big cuts [laughs]!

RYAN CHIAPPE: Mentally, spiritually, and physically, I’m in great spaces. Even sitting here talking to you, I haven’t ate or drank since this morning. I’m happy you know… doing good, and I’m really looking forward to this opportunity. I’m Fighting for the MFC, and it’s probably the biggest show I’ve fought on. Also, being live on HD net, so it’s good. I’m just ready to go on Friday. I still have to cut a little weight but that’s part of the game, but I’m happy man. I’m still in good spirits you know?, I believe in this sport, that mental toughness is huge. If you are complaining and you don’t like what your doing, then maybe you should get another job. When I look back at this, it will be the best time of my life. I’ve had a few fights now, so I know how the game is. I’m happy to be here. I’ve got a smile on my face, and I’m ready to go!

PRO MMA NOW: You have told me how much it means to be making your MFC debut, but how exciting is it to know that you will also be kicking off the main televised card live on HdNet?

RYAN CHIAPPE: It means a lot man. When Mr. Pavelich called me, that’s one thing he said. He said, ‘Hey kid, I’m going ot put you on live TV.’ I’m not fighting for fame or anyting, but I’m not going to lie to you, its going to be pretty cool to be on live television. It gives me a chance to go in there and have a good performance, and help me build my own brand. It’s going to be more exposure, and hopefully I’ll attract some more fans. It’s just exciting. I try not to let the whole ‘live on TV’ thing get to me, but it’s great man. Obviously it’s a lot better than fighting in the backyard in front of nobody.

PRO MMA NOW: Ryan, now you are known for your aggression and your exciting style of fighting. Do you feel any pressure to maintain that image, or is it something that just naturally happens when you get into the cage?

RYAN CHIAPPE: People have come to expect that from me. I think that’s one of the reasons Mark [Pavelich] signed me, but at the same time it’s a sport. At the end of the day you have to win. I use the words ‘controlled aggression.’ When I go, I go, but I’m not going to be looking for anything, im just going to let it come. I don’t feel any pressure. I mean, if anything, I put pressure on myself. I expect certain things from myself. That’s the way I train, and that’s the way I fight.

PRO MMA NOW: Fans really want to see exciting fights, so does that add any additional pressure on top of everything else?

RYAN CHIAPPE: As the sport gets more mainstsream, there are so many fight cards, and so many fighters. You are seeing mediocrity come in, with guys playing it safe. There are too may decisions. I think you start to tune some fans out. As a fan, I want to see finishes. I don’t want to see guys say, ‘I know I won the first round, and the second round was close, so let’s do barely enough for the third round.’ To me, that’s not fighting. Let’s not forget this is a fight. None of my fights have went to the judges yet, so as far as I’m concerned, you don’t even need judges at my fights. I think that that’s the way promoters should be looking to go, for fighters that look to finish, not lay and pray their way to a decision. We have to remember that the fans are the reason we are here, they are the ones that buy the tickets. You want to entertain them, but at the same time you also want to have yourself a career, so it’s a balance. I just go back to what got me into this sport… I like to fight.

PRO MMA NOW: I follow you on Twitter, and social media has exploded in MMA. It’s everywhere. How do you feel about the social media craze and how it relates to marketing fighters?

RYAN CHIAPPE: It seems like half of it is training and competing, and the other half is marketing yourself. I want to build my name on my fights. People might like me for my personal image or they might not, but I’m not trying to be something I’m not. I think integrity is huge in this sport, at least for myself. It’s not like we are making tons of money off of this. I’m out there because MMA made me a better person, and I’ve met some of the best people in my life through MMA. As a fighter you need to have that personal element about you. I think if people can identify with you, that makes them tune in more, and have more interest. How much has the sport changed in the last 5 years? How much will it change in the next five? I’m on board, and now I’ve got a Twitter account [laughs].

PRO MMA NOW: You have mentioned before that you haven’t always made the most of your training, and that you have changed that. What changes have you made to become an all around better fighter?

RYAN CHIAPPE: My diet is really clean, and I live clean. I really love to train now. At first, I was that really athletic guy in my twenties, and I was just an athlete. I mean, I’m still learning how to fight. Now I’m really learning the game. I met Bill Mahood when I was like 25 or 26, and in six months I was fighting. I’ve improved my game and I take it a lot more seriously. I’ve had a few fights now, and I want to keep it going. If i want to keep it going, I had to take my training to the next level. I think I’m capable of that, and I kind of want to prove to myself and see exactly what I’m made of… Everyday I wake up, I’m happy.

PRO MMA NOW: How does it feel to have your boys, Kajan Johnson, and Sabah Fadai there with you? I mean, all three of you guys are friends, and all fighting on the televised main card. What does that mean to you?

RYAN CHIAPPE: It’s cool for sure! Me and Kajan are roommates, and I’ve known Sabah for a long time. He was actually staying at my house the last few nights. Having all of us on the card on the same night is pretty cool. Here at the hotel, we have each other, and we have lots of support. Ideally, I’d love to fight all my fights with my friends, but unfortunatley it doesn’t work that way. This is a special case. It ended up working out. We all have a job to do, and at the end of the day, you have to go in there and fight by yourself, but it’s great. They can help you cut weight, or if you need anything, they are right there!