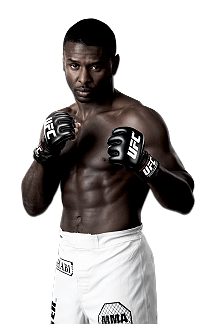 After a rough start in his stint with the WEC, Yves Jabouin (15-6) is fine-tuning his all-around mixed martial arts game and planning to show that he’s better than ever at UFC 129 in Toronto against fellow featherweight Pablo Garza (10-1).

Jabouin started training in various martial arts early in his youth before making a name for himself in the talent-laden Canadian MMA scene.

“I’ve been doing martial arts since about the age of 10 and I haven’t stopped,” he told ProMMAnow.com. “I went from Karate, to Tae Kwon Do, to kickboxing; I was trying different martial arts and it became my passion.”

Jabouin competed as an amateur kickboxer before MMA took over the combat sports scene.

“When kickboxing was dying out in Montreal, in came MMA and the UFC era, and I just naturally followed that.”

Although Yves’s striking skills are no secret, he’s always felt comfortable in the grappling aspect, having worked on his ground game for the past ten years. While some strikers try to avoid going to the mat, Jabouin actually has wrestling skills he can put good use.

“Wrestling is a natural sport for me,” Jabouin said.

Now he needs to put it all together in the cage, avoiding the tendency to automatically revert back to his natural striking instincts and neglect his other tools.

When Jabouin entered the WEC, then the premiere North American promotion for the featherweight and bantamweight classes, he dropped a split decision to Raphael Assuncao. Then he faced fellow Canadian standout Mark Hominick at WEC 49, where the two engaged in one of the most memorable fights in the promotion’s history.

After a back-and-forth first round, Jabouin dropped Hominick in round two, but during the ensuing scramble, Hominick mounted Jabouin and scored a sensational TKO win.

“I think for that fight I should’ve probably mixed it up a little more than to just make it a striking battle,” Jabouin said. “It should’ve been more of a tactical fight than just a brawl. This fight was supposed to happen years back, so I guess I got a little emotional about this fight, and I think both of us did. If it would happen again, it would probably be more of a technical fight.”

Explaining the long delay in their matchup, Jabouin added, “Back in the days of UCC, he was the champion and I was a local fighter in Montreal. I was scheduled to fight him, but something happened with the politics.”

Jabouin now feels like he’s starting to show what he’s really capable of in MMA. In his final WEC appearance, he picked up a much-needed unanimous decision win over Brandon Visher.

“We did some changes in the training camp,” Jabouin said of his preparations for the Visher bout. “We really worked on bringing the wrestling portion out of me. I’m a good wrestler, but when I get into the Octagon, my instinct is to bang with people and fight on my feet. I didn’t really mix it up. In MMA, the best fighters are the ones that can really mix up the aspects of the game. I have all the tools, I just hadn’t put them together, and that’s what we worked on a lot in that fight.”

Now that Jabouin is set to make his UFC debut, things don’t feel all that different. He’s fought top-level featherweights before and battled it out on television. Still, it’s worth remembering that smaller fighters like Jabouin haven’t always had a major promotion willing to pay for their services and give them a platform to show off their skill.

“Basically, I always felt like I had the talent and had the tools to be in the big show; I just didn’t think back then [I could ever get] there since there was no 145 class,” Jabouin said. “I always thought [the regional shows were] the highest level I was ever going to compete in. It wasn’t something I really thought would be a career or I’d be doing full-time. But now that it’s in the UFC and you can make a living doing it full time, that’s a lot of motivation right there.”

For Jabouin to continue his success, he’ll need a strong training camp behind him. At the Tristar MMA gym in Montreal, he has just that. It’s produced the likes of UFC welterweight champion Georges St. Pierre and up-and-comers like John Makdessi, and now other stars, including former WEC bantamweight champion Miguel Torres, are beginning to make their way to Montreal to learn from head trainer Firas Zahabi.

“I remember the first year that I joined Tristar, Firas was a training partner and we kind of grew up together, and I saw him going and becoming a great coach,” Jabouin said. “Firas is a great friend and a great coach. He’s a scholar of the game of mixed martial arts. Everything he ever did in the class, he had his notebook taking notes; everything had to be perfectly done. Now we see what he is bringing to the table and he’s creating great fighters, and I’m really lucky to be part of that team.”

With the talent he has around him, Jabouin doesn’t believe Garza has any grappling skills he hasn’t seen before.

“I think I’ve already seen whatever he has to offer,” Jabouin said. “Raphael Assuncao is a top-notch Jiu Jitsu black belt and he wasn’t able to submit me.

“I train with guys like Miguel Torres. The level of grappling with these guys … it’s not a problem for me. The skill level [at Tristar] is just incomparable. I’m ready to face anybody out there.”

And if the fight stays on the feet, that’s Jabouin’s area of expertise.

Asked if he thinks Garza might try something like the early flying knee he used to knock out Fredson Paixao, Jabouin replied, “He might. But I believe he also knows that I’m a very different fighter than [Paixao]. I think he’s going to have a harder time connecting with a flying knee with someone that moves around like me.”