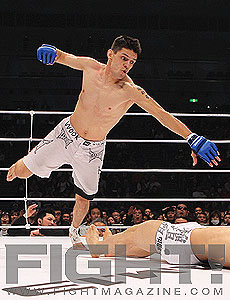 Before looking ahead to Cole Escovedo’s DREAM 16 matchup against UFC and Sengoku veteran Michihiro Omigawa (11-8-1), it’s worth remembering how far he’s come to get to this point.

At one point Escovedo (16-5) held the WEC featherweight title before a string of three consecutive defeats to Urijah Faber, Jens Pulver, and Antonio Banuelos halted his progress. But a much bigger problem emerged when Escovedo acquired a staph infection that, once diagnosed, ultimately required spinal surgery.

Doctors doubted whether Escovedo would walk again without any difficulty, let alone fight, but Cole proved the doubters wrong in a big way. After a layoff of nearly three years, Escovedo is 5-1 since the surgery, including wins over WEC vets Jeff Bedard and Yoshihiro Maeda.

Despite the severity of his injury, Escovedo felt comfortable getting back into the cage by the time his first bout came around.

“I felt back to normal a couple months before I landed my [Palace Fighting Championships] 13 return fight,” Escovedo said. “I was actually seeking a fight for a while, but no one wanted to take the chance on a damaged ex-champ [laughs]. Fighting has always felt second nature to me, even when I was on the mend. And every fight I go in thinking it’s just one more drop in the bucket of ‘I told you so’ towards all the doubters.”

The win over Maeda at DREAM 13 was particularly impressive — a highlight reel head kick KO over a former WEC title challenger. Escovedo is better known for his submissions, which account for nine of his career victories, but he spends plenty of time on his striking game.

“The head kick combo is something we work on all the time at my camp, I just haven’t really had the opening or timing in a fight to catch someone with it,” Escovedo said. “And I won’t lie; a little luck helped, as it was a perfectly landed kick.”

Of course, the comeback hasn’t gone exactly as planned. Escovedo has made no secret that he wants to return to his former home, the WEC, and fight the best in the world at 135. He had the opportunity to fill in last-second as an opponent for Eddie Wineland at WEC 49 in Edmonton, Alberta, Canada, but an injury got in the way.

“I got the call but had just suffered a dislocated rib and was trying to heal up for a title defense,” he said. “It was the right decision at the time, as fighting hurt in the WEC would not have made for a good showing for my first fight back there, [and] I felt the maeda fight should have got me a spot there anyway.”

While his dream comeback seemed so close, a 135-pound title rematch with Michael McDonald at Tachi Palace Fights 5 created another bump in the road.

Escovedo defeated McDonald in his first fight back from injury in May 2009, but the second fight went McDonald’s way as he knocked out Escovedo in the second round. Now McDonald is set to make his WEC debut against Clint Godfrey at WEC 52.

Asked what went wrong in the McDonald fight, Escovedo replied, “Everything!”

He continued, “I think the fact that I didn’t feel I should be doing rematches this soon in my return and I don’t think I felt like the champion … it just didn’t seem that way, almost like someone didn’t want me being champ there. I trained my ass off for that fight, but come game day, I dropped the ball and didn’t do anything me and my coach worked on for the game plan. And I have no one to blame but myself for that night. Mikey came out with his gameplan and followed it, and now with his venture to the WEC that should have been mine … he deserves it.”

It was a setback, but a fight at DREAM 16 on Sept. 25 in Nagoya, Japan against Omigawa, who reached the finals of a stacked Sengoku featherweight tournament and won six of his last eight fights, is a pretty nice consolation prize. Escovedo relished the opportunity to fight in Japan last March and quickly jumped at the Omigawa offer, even though he was only given a couple weeks notice and will have to fight up a class at 143 pounds.

“It was an awesome experience or I wouldn’t have taken such another short notice fight against another tough opponent,” Escovedo said of his time with DREAM.

Escovedo hasn’t taken an in-depth look at Omigawa’s fighting style, but he prefers going into a fight more focused on his own game plan.

“Judo and hands is all I know of him,” Escovedo said. “The less I know the better it’ll give me a more open approach to the fight as my coach won’t be able to make the trip.”

In case all of that isn’t enough to think about, Escovedo is also scheduled to fight former WEC title challenger Chance Farrar at Tachi Palace Fights 7 on December 2.

Asked whether having another fight on the horizon might distract him, he replied, “No not at all. I am not looking past [the Omigawa fight], so I’ll go for broke to put on a good fight for myself as well as the fans.”

Cole wished to thank the following:

Wanna thank the usuals, my girl Jess for putting up with me and for going with me on this one. My mom, who has always supported my fighting decisions. My team at Victory MMA here in Fresno. My management team, Jason Genet and his guys at Magnetic Marketing Assoc. My boy Mots at cageradio.com and Mar at madbeatings.com and go see my new coleescovedo.ning.com and sign up, I’ll be posting pics, etc. from Japan.