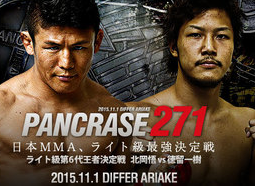 Pancrase 271 is coming up on Nov. 1 at Differ Ariake Arena in Tokyo, Japan. The event will stream live in the U.S. (Oct. 31) on UFC Fight Pass and commentating that event will be none other than our old friend Dan “The Wolfman” Theodore. Dan was on Pancrase Radio this week to break down … Read more

Press Release: World Victory Road confirmed the following fights for SENGOKU 5 which will feature the first round of a Middleweight Grand Prix.  It has been rumored that the winner of the Grand Prix gets the prize of fighting Kazuo Misaki. SENGOKU 5 Date : September 28th, 2008 Place : Yoyogi National Gymnasium in Tokyo, Japan … Read more