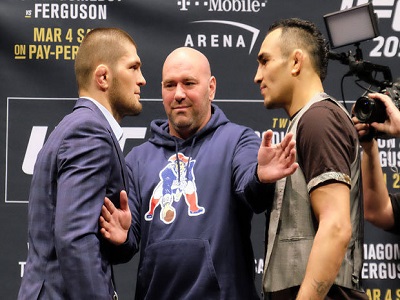 Who broke the 911 call from Tony Ferguson’s wife? TMZ of course.

Tony’s wife called 911 about his behavior which was way out of line – we’ll just give you a heads up there. Here is the call in question and it is telling. Check it out.

According to an autopsy report, WEC, UFC, and IFL veteran, Justin Levens and his wife Sarah who were found shot to death in their home on Wednesday, had been dead four days.

Investigators did not find a suicide note, however, they do believe the deaths were the result of a murder-suicide based on the position of the bodies and the gun that was retrieved from the scene.

WEC, UFC and IFL veteran, Justin Levens, 28, and his wife Sarah, 25 were found dead on Wednesday, Dec. 17, in their condominium home in Laguna Niguel, California, apparently the victims of gunshot which is believed to be a murder-suicide.

It was reported Sarah Levin’s mother found the bodies and notified authorities around 2:30 pm PST on Wednesday. The investigation into the deaths is ongoing.

Levens who went by the nickname “The Executioner,” fought Evan Tanner at UFC 59 and Jorge Santiago at Ultimate Fight Night 5. His last fight was at Palace Fighting Championship in October of last year where he was submitted by Kenny Ento. Levens had a record of 9-8. He fought five times in 2007 but lost each match.