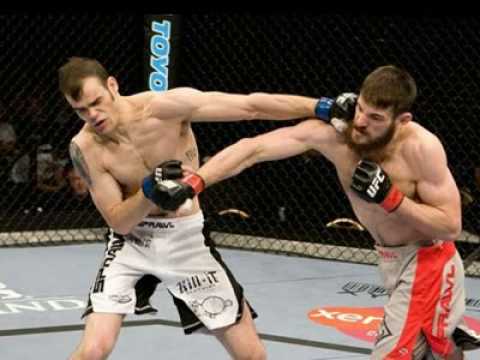 After dropping back-to-back fights for the first time in his career, Dustin Hazelett will drop down to the lightweight division. Rick Story stopped the submission wizard last Saturday night at UFC 117.

UFC middleweight contender Vitor Belfort shares his thoughts on the UFC 117 main event between Anderson Silva and Chael Sonnen. Barring a rematch, he is likely next in line for a shot at Silva.

Soares: “I don’t necessarily think an immediate rematch is legitimate. It’s not like he won by decision. You got submitted man. You were on top of him for 23 minutes of the fight and couldn’t finish him.”

Viewers get a look at the pre-fight press conference and a mash-up of classic Chael Sonnen anecdotes and one-liners, including a very funny exchange between he and Fanhouse reporter Ariel Helwani regarding the number of votes Sonnen received in the Oregon Senate race.

How much respect did Chael Sonnen earn Saturday night at UFC 117 in Oakland, Calif.? Going into the fifth round, it looked like Sonnen was going to do the same thing he had done the four previous rounds, put middleweight champion Anderson Silva on his back and beat him up. And he did that for … Read more

OAKLAND, Calif. – Chael Sonnen backed up his trash talk with a dominating performance through four-and-a-half rounds against the seemingly unbeatable Anderson Silva. Unfortunately for Sonnen, a championship fight is 5 rounds, and it only takes mere seconds to change the face of a fight in mixed martial arts. After a one-sided beating of “The … Read more

“UFC 117: Silva vs. Sonnen” takes place tonight at Oracle Arena in Oakland, Calif. It’s the UFC’s first visit to Oaktown and the card is absolutely stacked. Pro MMA Now will provide live results and play-by-play commentary during the event.