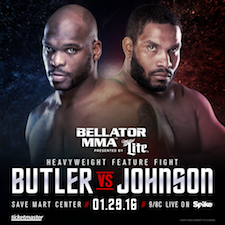 Josh Koscheck (17-10) has been forced out of his fight at Bellator 148 due to injury. The longtime UFC vet was expected to face Matt Secor (7-2) in the January 29th headliner live on Spike. Moving into the headline spot now will be a welterweight clash between British KO artist Paul “Semtex” Daley (37-13-2) against Memphis, … Read more

Bellator Fighting Championships will kick off its Summer Series at the Seminole Hard Rock Hotel & Casino in Hollywood, Fla., on June 25 with Bellator 46.

It is a card with champions in non-title fights and the semifinals round of a featherweight tournament. What could be more Bellator?

Reno, Nev. – Live from the Silver Legacy Resort Casino, and airing on HdNet tonight, King of the Cage is back, with “King of the Cage: Legacy.” The main event will feature a heavyweight scrap between Mike Kyle (14-7-1 MMA, 2-1 UFC) and Jon Murphy (5-3). Keep it locked here at Pro MMA Now (ProMMANow.com) … Read more

In one of his last hard training sessions leading up to his bout this Saturday, PRO MMA (promma.info) got a peek at one of Eric Lawson’s sparring sessions at Combat Fitness in Concord, California. The Strikeforce middleweight traded leather with champion Muay-Thai practitioner Caley Scott and UFC veteran Gil Castillo.

Lawson (8-2) had been set to take on American Kickboxing Academy’s Richard Montoya, however, Montoya was forced to back out due to injury. Derrick Thornton had been slated to take Montoya’s place but Waylon Kennell (4-1) will go toe-to-toe with Lawson on April 11th at Strikeforce: Shamrock vs. Diaz.

Eric is undefeated in Strikeforce and is steadily climbing up the ranks.

He last fought on the Strikfeforce at the Playboy Mansion card submitting Kenneth Seegrist toward the end of round one.

After racking up three straight wins in the San Jose based promotion and winning four of his last five, Eric has started to make a name for himself.

A victory over  the young and undefeated Tony Johnson would put Eric’s Strikeforce record at 4-0 and his overall record at 8-2.