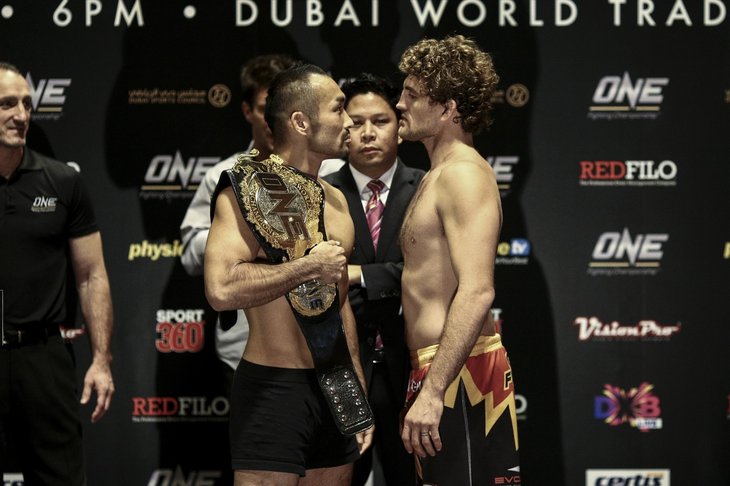 28 August 2014 – Dubai, United Arab Emirates: ONE Fighting Championship announced today that all but one mixed martial artists competing tomorrow have made weight and are ready for ONE FC: REIGN OF CHAMPIONS which takes place tomorrow evening at the iconic Dubai World Trade Centre in Dubai, United Arab Emirates. Mohamad Walid failed to … Read more

There were approximately 1,000 spectators on hand at Differ Ariake to witness the exhibition match which was said to resemble a training session one might see inside a fight gym. Aoki traded in his usual attire of colorful spats for shorts and a gi and Fedor sported a gi with long pants.

Reports are saying some of the highlights occurred when Fedor threw Aoki with several Sambo moves, Aoki attempted a flying arm-bar, and Fedor finally submitted the lightweight champion with an Achilles lock at the three-minute mark of the five-minute bout. The video of the session will air free of charge on a video-on-demand basis starting on Monday, May 4 at www.M-1Global.com and www.Mixfight.ru.

Shinya Aoki, the newly crowned WAMMA LW champion has announced he will make the move up in weight to compete at welterweight in the Grand Prix. As many recall, Aoki submitted the heavily favored Eddie Alvarez at the 2008 New Year’s eve K-1 ‘Dynamite!!’ event to earn the WAMMA Lightweight crown.

Hayoto ‘Mach’ Sakurai has also been confirmed for the Grand Prix, coming off of his first round TKO over Shibata also at the 2008 ‘Dynamite!!’ event on New Years Eve.