UFC ligthweight contender George Sotiropoulos (13-2) will face Joe Lauzon (18-5) at UFC 123 on Nov. 20 in Detroit, with a win potentially earning him a shot at the title.

MONTREAL – Mauricio “Shogun” Rua, Alan Belcher, Jeremy Stephens and Sam Stout each earned $65,000 fight-night bonuses for their performances at tonight’s “UFC 113: Machida vs. Shogun II” event. “Shogun” added to his new title as UFC Light Heavyweight Champion, with an additional $65K and “Knockout of the Night” honors, for his highlight reel KO of the … Read more

MONTREAL – The first meeting between Lyoto Machida and Mauricio “Shogun” Rua ended in a controversial decision that has been discussed by MMA fans every since that fight back in October of 2009.   There would be no controversy this time around, as “Shogun” caught Machida with a glancing right hand about three minutes into the fight, dropping … Read more 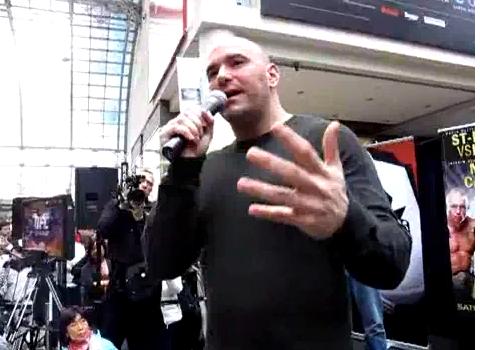 In UFC President Dana White’s second blog for “UFC 111: St. Pierre vs. Hardy”, which takes place this Saturday night at the Prudential Center in Newark, N.J., and airs live on pay-per-view, White and the gang are in Canada. And now that they got into the country, the U.S. won’t let Marty Cordova back inside … Read more

Although he was picked apart by Stout’s striking, Lauzon showed great tenacity by continuously coming forward and bringing the fight. Lauzon and Stout were awarded “Fight of the Night” honors for their effort.

It is obviously difficult, if not impossible, to go through something like an ACL surgery and not have it affect you in your first fight back.

Lauzon and Stout both took home “Fight of the Night” honors, while Miller used a slick inverted triangle to kimura combination to submit Dan Lauzon earning him the “Submission of the Night” bonus and Paul Daley landed a devastating left hook to lock up his ”Knockout of the Night” award.

Joe Lauzon fought his way back from a devastating knee injury three months ahead of schedule prior to stepping into the Octagon tonight against Sam Stout. Early on it looked like Lauzon would have his way with Stout, getting an easy takedown, working to mount, then almost securing a kimura as Stout looked to roll out of danger.

LAS VEGAS – Rashad Evans had gotten away from his dominating wrestling of late, favoring his speed and power in the exciting knockouts of Chuck Liddell and Forrest Griffin. Following his devastating knockout loss at the hands of Lyoto Machida, some fans wondered if Evans would revert back to wrestling in this bout against the heavy-handed Thiago Silva.

That is exactly what he did in a dominating effort through the first two and a half rounds against the the very tough brazilian. Evans used his speed and superior wrestling to control the fight, taking Silva down countless times during the first two frames of the bout.

Silva managed to work back to his feet each time he was taken down, but was unable to mount any tangible offense until late in the third round after calling out Evans to man up and come forward for a war. Silva taunted Evans with his hands down by his waste and motioning with both hands for Evans to come forward, in an attempt to bait the former light heavyweight champion into a stand up battle.

Las Vegas, NV (USA) – With the pivotal light heavyweight war between Rashad Evans and Thiago Silva already slated to headline the card, The Ultimate Fighting Championship®(UFC®) confirms the remaining bouts for UFC 108: EVANS VS. SILVA, which is presented by “Bayonetta” on Saturday, January 2, 2010 and live on pay-per-view from the MGM Grand Garden Arena in Las Vegas, Nevada.

Tickets for UFC 108 are priced at $600, $400, $300, $200, $100 and $50, not including applicable service charges, are on sale and are available at all Las Vegas Ticketmaster locations (select Smith’s Food and Drug Centers and Ritmo Latino). Ticket sales are limited to eight (8) per person. To charge by phone with a major credit card, call Ticketmaster at (800) 745-3000. Tickets also are available for purchase at UFC.com, www.mgmgrand.com or www.ticketmaster.com.

TUF 8 finalist Phillipe Nover, in addition to his job as a UFC fighter, is also a nurse. In this video he shows the proper way to drain your own cauliflower ear. Are we ever going to see Nover back in the Octagon? He’s only fought once since losing to Efrain Escudero in the TUF … Read more

According to UFC President Dana White at Saturday night’s post-fight press conference, 21,451 people brought in a live gate of $4.9 million to the Bell Centre in Montreal, Canada, to watch “UFC 97: Redemption.”

The UFC gave out their largest bonuses ever with $70,000 per fighter.

Following UFC 97, Dana White confirmed his friend, Chuck Liddell, would “be with him forever” as part of the UFC, but it was his last time in the Octagon. “You will never see him on that canvas again” said the UFC President.