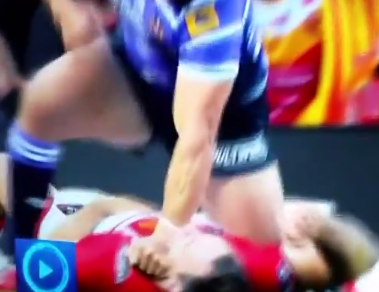 This might remind you of that time Dan Henderson knocked Michael Bisping to the canvas only to follow it up with that diving aftershot. But it’s Rugby and you aren’t supposed to punch your opponents unconscious. You’re supposed to kick a lopsided ball around a field and run around constantly and tackle each other. But in … Read more

Deividas Taurosevicius, a former pro Rugby player from Lithuania, originally moved to the United States to play for the Professional Rugby League. The league never really got off the ground in America, but Deividas decided he wanted to stay.

It was here he discovered his passion for MMA. The same drive that had made him a top athlete in Rugby (He was awarded Best Player in Lithuania in 1999), he turned toward MMA. Having turned pro in 2002, Deividas now owns his own gym, and holds a record of 11-3, with wins over such fighters as Dan Lauzon, Bart Palaszewski, and Javier Vasquez, to name a few.