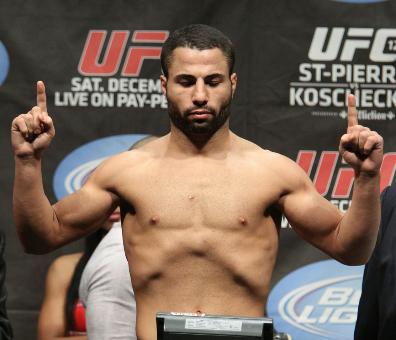 UFC lightweight prospect John Makdessi will look to move to 2-0 in the Octagon against TUF 12 alum Kyle Watson on April 30 in Toronto.

Featherweight prospect Kenny Foster (8-2) has been confirmed as a participant for the Bellator Fighting Championships Season 4, beginning in March and airing live on MTV2.

Lightweight prospect Pat Audinwood discusses his recent release from the UFC and his two Octagon appearances against Thiago Tavares and John Makdessi.

The UFC has reportedly released Pat Audinwood (9-2-1) following his unanimous decision loss to John Makdessi at UFC 124. Audinwood went 0-2 in the UFC.

UFC lightweight John Makdessi talks about his impressive Octagon debut win over Pat Audinwood at UFC 124 on Dec. 11 and his love of competing.

AMSTERDAM, Holland (March 24, 2010) – “M-1 Selection” is changing the sport of professional Mixed Martial Arts by giving new and upcoming fighters an opportunity to gain global recognition by competing in M-1 events held all over the world. The opening round of “The M-1 Selection, Americas,” featuring 11 entertaining fights, will be held Saturday, … Read more

Headlining American Steel Cagefighting’s inaugural show in Salem, New Hampshire Friday night, July 31, was a welterweight match-up between Doug “Flash” Gordon and Nate “The Future” Lamotte. Lamotte started off strong with a takedown and some ground and pound, but as soon as Gordon was able to get back to his feet he sunk in an arm-in guillotine for the tapout victory at just 2:01 of round one.

Other featured bouts on the card included a lightweight co-main event with Pat Audinwood taking on Al Buck and a Super Fight with UFC veterans Kevin Jordon (fought at UFC 53, 56) and Patrick Smith (fought at UFC 1,2,6) battling it out for heavyweight supremacy.

UFC pioneer Patrick Smith was there at the beginning and 16 years later the ageless wonder is still going strong as he prepares to fight another UFC veteran, super heavyweight Kevin “The Shamnan” Jordan (11-8-0), in the Super Fight on American Steel Cagefighting’s (ASC) first professional mixed martial arts show, July 31 at the Icenter in Salem, New Hampshire.

Smith (16-13-0), now fighting out of Milburn, Oklahoma, lost a tough fight to Ken Shamrock in UFC 1. He came back strong in UFC 2, winning three fights in a row, before eventually losing in the championship match to legendary Royce Gracie. Patrick’s most notable wins have been against Rudyard Moncayo in UFC 6 and last year versus Eric “Butterbean” Esch.