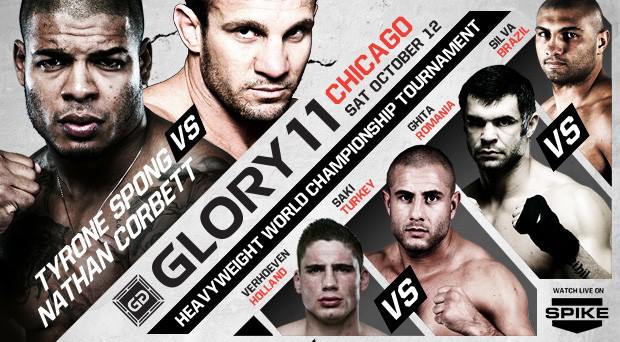 Spike TV is broadening their combat sports coverage and it starts tonight with Glory 11 live from Chicago. Crossover sensation Tyrone Spong will go toe to to with a familiar dancing partner in Nathan Corbett. Corbett knocked Spong out in 2007 but it was ruled a no contest after some confusion over referee instructions.

Ten world titles were on the line Friday night at “Champion of Champions 2,” in Montego Bay, Jamaica. The best Muay Thai fighters from around the world were gathered together in one place for one night only to lay it all on the line, and PRO MMA (promma.info) has the official results.

In possibly the highest profile fight of the night, Nathan “Carnage” Corbett knocked out Tyrone “King of the Ring” Spong in the third round. Spong could not get up to make the ten count, however, Corbett thought the referee waived the fight to go on and began to attack Spong with strikes. Because of this, the fight was ruled a “no contest.” It seemed quite unfair to Corbett who had already technically won the fight.

PRO MMA (promma.info) in association with Go Fight Live presents access to a LIVE WEBCAST of “Champions of Champions 2,” from Montego Bay, Jamaica.

Some of the top “world class strikers” on the planet go at it tonight in this Super Bowl of Muay Thai. Don’t miss it. The action starts at 9pm ET/6pm PT. Log in to the LIVE WEBCAST a few minutes early so you can sign in. Cost is only $14.99.