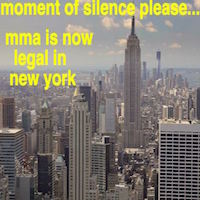 Tuesday night on UFC Tonight on FUEL TV, UFC President Dana White beamed in to discuss several topics with hosts Chael Sonnen and Kenny Florian. White gave an update on his recent surgery for Meniere’s disease, discussed the possibility of Chris Weidman vs. Anderson Silva, Rampage’s future and the UFC’s “right to match”, Eddie Alvarez’s contract situation and why fighting on Spike in no way equals fighting on FOX. White also explained his recent run-in with Justin Timberlake and what the pop star said to him when he called him after hearing what White had said about him in a recent Sports Illustrated interview. [NOTE: Video contains additional footage not seen on UFC Tonight]

If you don’t think the UFC is serious about getting MMA legalized in New York, the promotion and its partners contributed at least $175,000 to a variety of state campaigns in 2010.