Lyoto Machida shocked critics calling for his retirement by defeating upstart Eryk Anders at UFC Brazil on Saturday.  It was the first time he had his hand raised since 2014 and his reaction was fun to watch. Check it out and his post fight interview.

It’s all gone to piss in this interview with Lyoto Machida‘s father. Reporter Ariel Helwanni is interested to hear about the Machida family’s daily urine regimen and Poppa Machida is more than happy to talk… and drink. Yes, Poppa Machida decides to show the infatuated Helwanni right then and there urine therapy is serious business. … Read more 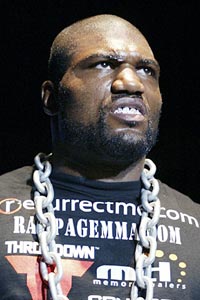 The UFC® returns to Montreal with the World Light Heavyweight Championship on the line – Tickets on sale this week for UFC® 113 Machida vs Shogun 2 – Saturday, May 8 live at Bell Centre in Montreal, Quebec, Canada Don’t miss UFC® 110 Nogueira vs Velasquez this Saturday night -Live on Pay-Per-View, Yahoo! Sports and … Read more

The Silver Star website (www.silverstarnow.com) describes the Lyoto Machida UFC 104 Walkout Tee as: The Machida Dragon features a belt print with a burnout applique accented with red foil. Machine washable. 100% cotton. Price: $44.00 (add $2 for XXL or $4 for XXXL – no tax, except in Calif.) + shipping. They are offering free shipping on orders of $50 or more.

OK, I received my shirt yesterday. I must admit, ever since I saw Machida walk out in that shirt at UFC 104 to fight “Shogun”, I was like “dammmmn…” that’s a badass shirt and I want one. So I finally got it, opened the package, and my first thoughts were that it looks better even in person.

A heavyweight bout between Ben Rothwell and Chase Gormley, which had originally been slated for “Affliction: Trilogy” on Aug. 1, has been moved to UFC 104 set for Oct. 24 according to a new report on Sherdog.com.

Although Rothwell has been fighting professionally since 2001 and has an impressive record of 30-6, this will be his first time inside the Octagon. It will also mark Gormley’s UFC debut, who boasts an undefeated record of 6-0.

“Affliction: Trilogy” was cancelled after Josh Barnett, who was to take on Fedor Emelianenko in the main event, tested positive for steroids. First, Barnett was pulled from the card, then the entire card was shut down, and in the end, the entire Affliction MMA promotion closed its doors.