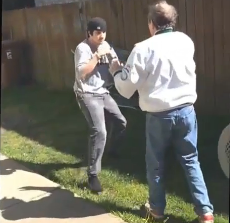 This is an interesting video. First, because the Dad is provoking his son and starts getting physical. But then the boy starts landing some shots. Pops goes down to a knee, he gets back up and keeps coming at the son who then lays him out cold… his Dad falls to the concrete smacking his … Read more 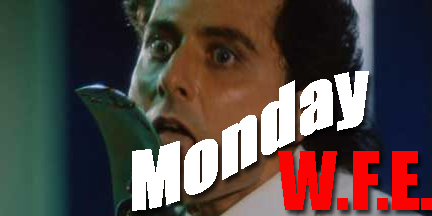 In this video we bring you a moment of awesomeness. A shirtless punk mouths off and gets knocked out for his efforts. Just because your favorite fighter has a good chin doesn’t mean you do. We apologize in advance and you’re welcome! 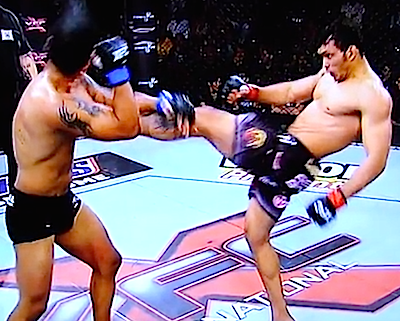 Luis “Sapo” Santos (60-9-1) racked up his 60th win as a professional last night at XFCi 3 in Sao Paulo, Brazil (as seen on Rede TV). The welterweight standout extended his winning streak to six with this third round front head-kick knockout of Mexican fighter Alfredo Morales (11-4). 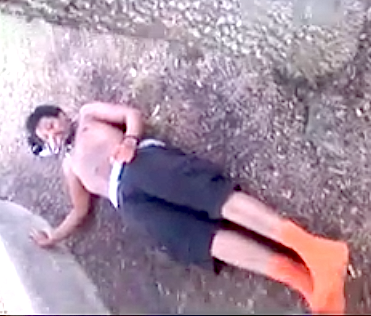 First of all let me just say that Goldy and Rogan’s jobs as longtime UFC commentators could be in jeopardy if Dana White ever sees this video. What you are about to witness happened one particular sunny afternoon in the city park when a young man tried to run away with another young man’s hat and shirt without his permission.

Legendary bad boy Gilbert Yvel will be given a chance to fight in MMA’s premiere organization this weekend when he takes on Junior dos Santos at UFC 108 in Las Vegas, Nev. The Nevada State Athletic Commission has granted Yvel a special one-fight license. If everything goes well, and Yvel can control his urge to … Read more

Mike Whitehead could not understand why King Mo has been getting all the hype. Now, do you think Whitehead understands “why the hype?”

The ultra-experienced Whitehead preferred to fight King Mo at heavyweight, and Mo, who said tonight he fights at “money weight,” gladly obliged the big man who out-weighed Mo by over 40 pounds.

Whitehead landed a few leg kicks in the fight but that was it. He threw some punches but all he hit was air. Mo landed some solid jabs and hooks before he landed a huge right hand that dropped Whitehead to the canvas, where he followed up with a few extra shots that knocked “Iron” Mike out cold at 3:08 of round one.

Last week at “Bellator V” we saw the incredible inverted triangle submission from Toby Imada. This week at “Bellator VI” Yahir Reyes scores the knockout of the month (maybe KO of the year) with an incredible spinning backfist that sounds like a gun shot and puts his opponent Estevan Payan face first on the canvas … Read more

On Saturday night, May 2, 2009 Manny “Pac Man” Pacquiao took on Englishman Ricky Hatton at the MGM Grand in Las Vegas, Nevada. Pacquiao’s trainer, Freddie Roach predicted a third round KO over Hatton. He was close. Now the world waits for a potential future match-up between Floyd Mayweather Jr. and “Pac Man”.

So Gabriel Gonzaga lost last night against the behemoth that is Shane Carwin. He started out good but he left himself open to take a punch from a freight train. In honor of Mr. Gonzaga who will likely never get a title shot now, PRO MMA (promma.info) is proud to present this little gif of … Read more