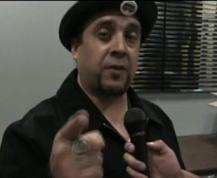 A longstanding defamation lawsuit between boxing trainer Juanito Ibarra and former client Quinton “Rampage” Jackson, along with Tito Ortiz, was due to go to trial next month but has been settled out of court. In a press release PMN received today, both Jackson and Ortiz are quoted as saying they were wrong regarding negative statements they … Read more

Between Bible lessons Juanito Ibarra discusses the development of James Toney as an MMA fighter. He says Toney is learning all aspects of MMA and compares him to a sponge. Ibarra also says Toney will not be rushed and will not step inside the UFC Octagon before he is ready. When asked who Toney’s first opponent might be, Ibarra says it’s not his decision and he no longer manages fighters. … Read more

Rampage opens up a bit more about Juanito Ibarra and basically calls him a con artist. Slowly but surely more information comes out about the reasons for their split.