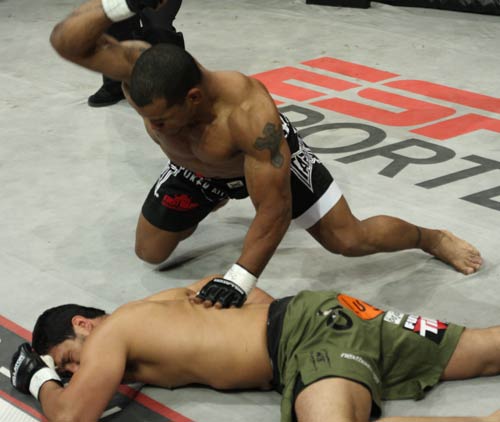 Most of the UFC 119 main card bouts didn’t deliver a ton of action, but even in a close defeat, lightweight Evan Dunham impressed the crowd and established himself as a legitimate title contender.

The UFC confirms the remaining bouts for UFC 119: Mir vs Cro Cop, which is presented by Halo Reach and live on Pay-Per-View on Sept. 25 at the Conseco Fieldhouse in Indianapolis, Ind.

The Spike TV prelims begin at 6 p.m. PT/9 p.m. ET and are as follows: Matt Mitrione will take on Joey Beltran at heavyweight and C.B. Dollaway will take on Joe Doerksen in a middleweight showdown.

The highlight of the night was Kazunori Yokota’s huge overhand right knockout of Team Quest’s Ryan Schultz midway through the first round. Schultz has dropped his last three bouts.

The main event also provided some nice fireworks between Olympic judo silver medalist Hiroshi Izumi and Muay Thai specialist Antz Nansen. It was the MMA debut for both fighters, and Izumi made the terrible mistake of trying to stand and trade strikes with Nansen.

Please join PRO MMA (promma.info) as we stay up late to bring you the Sengoku 10th Battle play-by-play. The card features up and coming prospects like Maximo Blanco, a judo crossover like Hiroshi Izumi, and a top flight heavyweight named Antonio Silva.

Maximo Blanco (3-2-1) vs. Tetsuya Yamada (3-1)
Round 1
Blanco charges in. Yamada scrambles and takes Blanco’s back. Blanco stays calm and fights the hands. He is able to reverse and lands a few shots from the top. Yamada gains guard and controls posture. A pick up and slam for Blanco. Rubber guard on the bottom for Yamada, and then Blanco stands up. Referee brings Yamada up too. Missed head kick turned into a leg lock for Yamada, but Blanco pulls out. Blanco stands the two scramble back to their feet. Upper cut lands for Blanco as Yamada pulls guard. Blanco in full guard throws little strikes. Yamada pulls a triangle choke, but Blanco powers out.
PRO MMA Score 10-9 Yamada

The Canadian Fighting Championship returns with “CFC 2” this Friday May 22nd at the Winnipeg Convention Centre. Headlining the card will be UFC veteran Joe “El Dirte” Doerksen (41-12) taking on Snake Team member Greg “Blade” Babene (6-4). Babene is filling in for Ron Faircloth (31-16) who had to pull out due to “undisclosed medical concerns.”

Doerksen has won his last two fights since being released from the UFC in 2008. Doerksen’s most recent victory came via third round TKO over Izuru Takeuchi at “Sengoku 6” last November. Doerksen’s opponent, Babene, trains under fellow Frenchman Cyrille Diabate, whose Snake Team is producing such prospects as Cheick Kongo and UFC 98’s “Professor X“. Diabate is also the striking coach for Team US on The Ultimate Fighter season 9.

Babene will have his hands full against Doerksen who is a submission specialist. If Babene could pull off a win against a veteran of Doerksen’s stature it would be huge for the up-and-comer. Here is the full line-up for “CFC 2:”