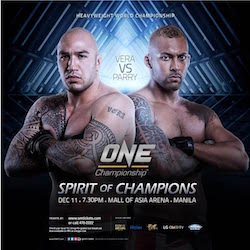 ONE Championship has announced a showdown between UFC vet Brandon “The Truth” Vera (13-7) and unbeaten Chi “Chopper” Lewis-Parry (6-0) of England for the inaugural ONE Heavyweight Title. The championship bout will headline ONE: Spirit of Champions on Dec. 11, 2015, from the Mall of Asia Arena in Manila, Philippines. Vera made an impressive ONE … Read more