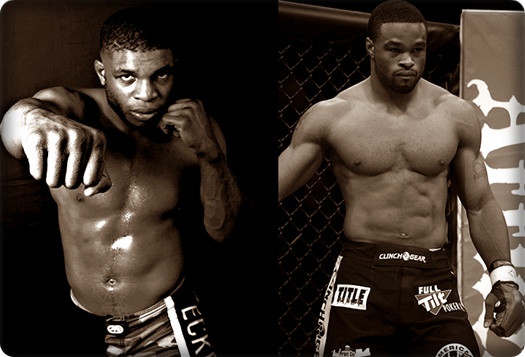 Jens “Lil’ Evil” Pulver took on Mike Lindquist in a featherweight bout Saturday night at XFO 38 in Woodstock, Ill. Things got off to rough start for Pulver after getting cut from a punch.

As this decade comes to a close we wanted to take a look back at one of MMA’s great figures of the past ten years, former UFC welterweight champion, Matt Hughes.

This documentary takes a look at the life of Matt and his twin brother Mark, two farm boys, who grew up in Hillsboro, Illinois, and whose childhood stories often sound like something out of the Dukes of Hazzard.

We get to see where the seeds of Matt’s MMA career were planted as his high school and college wrestling coaches are interviewed as well as the person who helped get him his first ever MMA fight. Matt made $100 for his first fight, and that’s when he met Pat Miletich, who was the referee.

This is the in-depth story of the most dominant welterweight champ in UFC history. Parts 2-6 after the jump…

The main event features current Strikeforce fighter* Jeff Curran (30-12-1), taking on Japanese star Tomohiko Hori (10-7-5) in a bantamweight showdown. The fight will be Curran’s second in under a  month. On Nov. 7, he defeated Dustin Neace via submission at “Strikeforce: Fedor vs. Rogers.”

The win was a big deal for Curran, who was coming off a four straight losses in the WEC prior to his win over Neace. Now back on track, Curran does not want to waste any time in keeping the momentum going.

On Saturday, Nov. 7, 2009, ProMMA.info’s southeast team traveled to Hoffman Estates, Ill. for the Strikeforce – Fedor vs. Rogers event. Headlining the card was a heavyweight battle between consensus number one heavyweight in the world Fedor Emelianenko and the undefeated hard-hitting Brett “The Grim” Rogers.

Although many felt Rogers would not be a problem for Emelianenko, he proved the doubters wrong, and gave The Last Emperor what was probably his toughest fight to date. You will see photos of both Emelianenko and Roger’s faces after the bout. Emelianenko won with a crushing KO victory but he did take some punishment.

It was a fight for the ages and we felt very fortunate to have witnessed such a historic event, being the first Strikeforce card to air live on CBS network television, and introducing the mainstream public to Fedor. Enjoy the photos.

The Du Page Expo Center in St. Charles, Ill. played home to Mayhem Promotions’ “Disorderly Conduct IV” event this past Saturday, Sept. 19, 2009. The show, sanctioned by Combat Consulting LLC., featured a main event between Anthony Goodwin and Jordin Hinman for Mayhem’s lightweight title. Hinman hung in there but the referee was forced to save him from further damage three minutes into round two, as Goodwin rained down punches and took home the title to become the new Mayhem Promotions Lightweight Champion.

Other academies represented with fighters on the card include Victory Martial Arts, Xtreme Couture, Team F.I.T., Hackney’s Combat, Sho-Nuff Academy, and No Comment MMA. Doors open at 5:30 p.m. and the fights begin at 7 p.m. For ticket information or directions visit www.mayhempromotions.com.

Mayhem Promotions will hold “Disorderly Conduct III” on Sat., July 18, 2009 at the DuPage Expo Center in St. Charles, Ill. There are a total of 13 bouts scheduled and three titles will on the line. Public weigh-ins will be held on Fri., July 17.

President and CEO of Mayhem Promotions Jeff Albin, spoke to PRO MMA (promma.info) about the big event, “We had a really good show at the same venue back in March. We’ve continued to develop relationships with impressive camps in this area, and feel we are putting forth a strong fight card; camps like Team Colon, Extreme Couture, Hackney’s Combat, The Hive, and Victory Martial Arts. We’re confident that every one of our fights can contest for fight of the night. We’re introducing two new belts at the 155 lbs. and 170 lbs. classes.”

PRO MMA (promma.info) was on hand Thursday as Miguel Torres, Joseph Benavidez, and Jeff Curran joined the MMA media on a conference call to talk about WEC 40: TORRES vs. MIZUGAKI set for April 5th in Chicago, Illinois. The fighters fielded questions on a number of topics including what it meant for Torres to be … Read more

PRO MMA (promma.info) has learned from WEC officials that Milwaukee, Wisconsin’s Anthony Pettis (6-0, 0-0 WEC) has been injured and will be replaced by the much more experienced Bart Palaszewski (30-12, 1-1 WEC) at WEC 40 on April 5th.

Palaszewski will now face Pettis’s original opponent, Art of War champion, Anthony Njokuani (9-2, WEC 0-1) on the undercard of the Chicago event headlined by Miguel Torres (35-1, WEC 4-0)) vs. Takeya Mizugaki (11-2-2, WEC 0-0). Fans watching the Njokuani vs. Palaszewskifight should prepare themselves for what is likely to be a stand up war. Almost half of the wins of both fighter have come from knockouts.