Karyn Bryant shared a video featuring Jeremy Stephens sporting an oversized bandage on his eye and cheek. It seems a little excessive but hey we aren’t doctors. Jeremy received an eye poke from Yair Rodriguez during their September 21st clash and after telling the referee that he couldn’t see they stopped the fight at just … Read more

Dear Jeremy Stephens you are now the new Jason White Lion Bryant from HooknShoot. Your riot inciting skills are commendable. After Jeremy Stephens suffered an eye poke from Yair Rodriguez at just 15 seconds in the main event of UFC Fight Night 159 there was a near riot. They started chucking water bottles and whatever … Read more 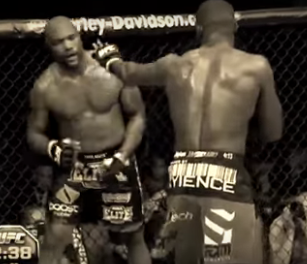 Did you see Travis Browne slow Matt Mitrione’s roll at #UFCBoston Sunday night with those eye pokes? Whether you thought they were intentional or not, Travis used to train with the Grand Master of Eyepokery himself, Jon “Bones” Jones. The former UFC light heavyweight champ and pound-for-pound king saw his familiar technique being employed against … Read more

ProMMAnow.com talks with Ovince Saint Preux following his win at UFC 159 to get his take on how the fight played out, his nerves going in, those first time “UFC jitters” and generally just how it felt to finally step inside that special cage that every MMA fighter dreams about, the UFC Octagon.

Anthony “Rumble” Johnson, who among other things is known for one of the worst eye poke incidents in MMA history, recently spoke with PRO MMA (promma.info) about a number of topics including the recent UFC 99 fight between Mostapha Al-Turk and Mirko “CroCop” Filipovic that ended in a brutal TKO beating after Al-Turk was poked in the eye and was unable to defend himself.

Johnson compared what happened in his “UFC Fight Night 14” fight against Kevin Burns to the Al-Turk incident,

“His poke wasn’t nearly as crazy as mine. I got poked in the eye five times by somebody who said their hand was broke. He was in the middle of the exchanges where he just happened to poke the guy in the eye, and that’s just what happens sometimes. But me, I got poked five times, and there’s no excuse you know?”