Remember when Shinya Aoki broke Mizuto Hirtoa’s arm? Well, the former SRC lightweight champion was back in action over the weekend against Dream veteran Katsunori Kikuno with the Deep title on the line.

Hayato “Mach” Sakurai and Takafumi Otsuka battled Yoshiki Harada and Hideto Kondo in a Tag Team MMA “Super Fight” main event at DEEP Beach Fight this past weekend and we have the video!

Due to his success in the Dream tournament, Masakazu Imanari has walked away from his Deep title. Hiroshi Nakamura and Takafumi Otsuka will fight for the now-vacant belt.

Former SRC champion Satoru Kitaoka continues to build his way back to the big show with a fight against Seichi Ikemoto. 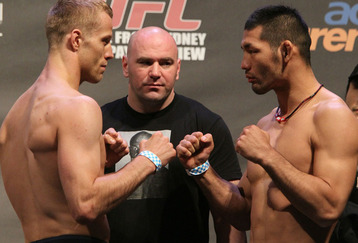 Despite losing a unanimous decision to Nick Ring this past weekend at UFC 127 in Sydney, Australia, Riki Fukuda is going to be awarded his win money.

If you read the headlines, then you know that MMA in Japan is dead. The large promotions have been having money problems due to the paltry number of big stars. However, the sport is still alive. The U.S. soccer team embarrassed themselves yet again at the last World Cup, is soccer now dead in this country?

For the first time in six years, Shinya Aoki will fight under the DEEP banner. On Oct. 24 in Tokyo he will meet Thai boxer Yokthai Sithoar at DEEP 50th Impact, which is DEEP’s tenth anniversary show.

Mariusz Pudzianowski’s opponent for KSW 13 In his MMA debut Mariusz Pudzianowski needed only forty-four seconds to dispatch his opponent. His second fight won’t be that easy as his next foe is much more experienced and demanding. On May 7, at KSW 13, The World’s Strongest Man will face Deep Megaton Champion Yusuke Kawaguchi. The Japanese … Read more

This weekend could be considered the calm before the storm. Next weekend will be stacked with Strikeforce and the FCF women’s tournament. However, there are still some quality local cards and, of course, collegiate wrestling. Please support the future MMA champions by watching wrestling on the Big Ten Network. On Friday at 8:00 p.m. Indiana takes on Wisconsin and then on Sunday at 10:00 p.m. Ohio State faces Penn State (all times eastern).

Shooto The Way of Shooto 1
Takeshi Inoue vs. Gerald Lovato
Earlier this week Takeshi Inoue came out in the media and asked for a fight with Hatsu Hioki. Instead he gets a non-title fight against Gerald Lovato. Inoue might not really be a top-ten fighter, but he is still light years ahead of Lovato. His only real chance to win is to come out looking for the big shot. Look for Inoue to capitalized on a gassed out Lovato late and secure a TKO stoppage.
Pick = Takeshi Inoue