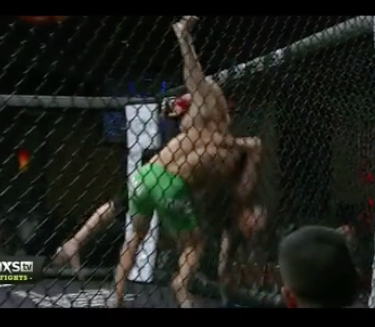 We’re covering the CES MMA XXXI card live tonight over here, but we had to make a special post just for this injury that happened when Pat McCrohan picked up Buck Pineau for a big slam only for Pineau to try to post his arm on the way down. What happens when 155-pounds or so meets an … Read more

UFC 115 saw some great fights, but also some fighter injuries. In this video we see the doctor taking off Rich Franklin’s glove and we see Pat Barry’s enormous broken foot.

In about three weeks from now the UFC is going to Dublin, Ireland for UFC 93 on January 17, 2009. The main event on that card is a very exciting matchup between Rich Franklin and Dan Henderson.

The co-main event features the return of UFC and PRIDE veteran and all around MMA legend, Mark “The Hammer” Coleman taking on Mauricio “Shogun” Rua.  Coleman, who is now forty-four years of age is climbing back into the Octagon to face the much younger, much faster, twenty-seven year-old Brazilian.

Coleman last met Shogun at PRIDE 31 in February of 2006 in Saitama, Japan. Coleman has had one fight since then and it was a loss against Fedor Emelianenko at PRIDE 32 in October of 2006. He’s been out of action for over two years.