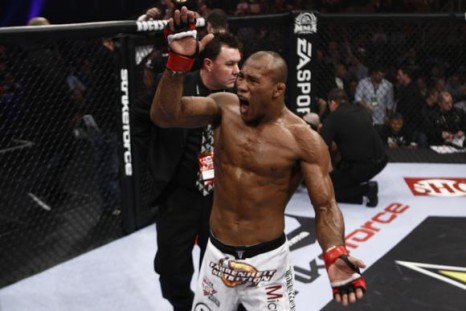 The UFC middleweight division will welcome a newcomer to its ranks when former Strikeforce middleweight champion Ronald “Jacare’ Souza makes his UFC debut against Chris Camozzi in the co-main event of the UFC on FX 8 event on Saturday night. The fight will air on FX with the main card starting at 9 p.m. ET, and will take place in Souza’s home country of Brazil. The middleweight took some time out to speak to UFC correspondent Paula Sack about his opponent, and what to expect in his UFC debut

The fight between Antonio “Bigfoot” Silva and Fabricio Werdum at Strikeforce – Fedor vs. Rogers this past weekend was one of the most exciting bouts on the card. Bigfoot started out very strong with a flurry of punches that put Werdum on his back.

Werdum hung tough and rallied with some nice shots of his own. In round one Bigfoot refused to play the ground game and stayed on his feet as much as possible to take advantage of his heavy striking power. However, he relaxed on that strategy and Werdum got him to the ground in round two.

Werdum’s striking seems to have improved quite a bit actually, and in rounds two and three he landed some good shots, got a couple of takedowns, controlled the pace, and ended the fight on top of Silva. In the end, Werdum got the unanimous 29-28 decision. ProMMA.info snapped a complete photo gallery of the fight which you can view after the jump. To see all our photos from the event go to the Photo Album.

PROMMA.INFO was at the 2009 Gracie Open on Oct. 10 at the Kezar Pavilion in San Francisco, Calif. and snapped these photos for you to enjoy. The Diaz brothers, Nick and Nate were there doing their thing. Nate brought home a submission victory over Adam Piccolotti in the Brown Belt division. To view all the … Read more We’ve heard all the rumors and the so-called “mistranslations” but it doesn’t seem to get any more clear than this new interview with Anderson Silva where he says he will retire once his current contract with the UFC is up.  He has six fights on his contract until June of 2009.  Silva says, “everything has it’s time and I believe my time is already over.”

When asked if it had anything to do with the salary he makes from the UFC he assures us it has nothing to do with that and that he has never fought for the money.  The reporter tells Silva that he is sad to hear this and Silva tells him not to be sad because he will be sitting at the side of the Octagon with a fat belly eating popcorn cheering on the fighters.