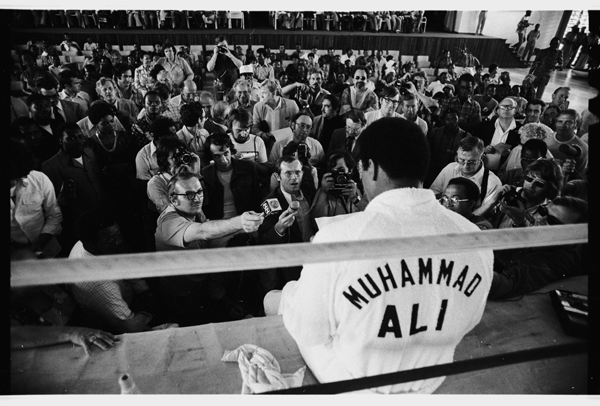 Roots of Fight, a new lifestyle apparel brand focused on connecting the history and evolution of boxing and martial arts, pays tribute to Muhammad Ali on his 70th birthday, today, January 17, 2012.

Coinciding with their title fight doubleheader “Diaz vs. Noons 2” tonight on Showtime, Strikeforce has pre-launched a new online apparel store at StrikeforceStore.com.

Good friend of the site and author of “The Human Cock Fighter Blog” here at ProMMA.info, Brian Imes, sent me one of his HILLBILLY FIGHT WEAR T-Shirts this week. I’ve become somewhat of a collector of MMA T-Shirts and already had my eye on the Hillbilly brand for a while now, so I was very happy to get my package in the mail.

Although it is not MMA news, this definitely bears mentioning. As many of you probably know, Silver Star sponsors athletes across a number of extreme sports. With the addition of Jerome Le Banner, Silver Star has officially thrown its hat into the ring of another combat sport – kickboxing.

Le Banner is famous for his aggressive fighting style, and knockout power. His upcoming fight will mark his 11th appearance at the World Grand Prix Finals.

(IRVINE, CA) – Wanderlei “The Axe Murderer” Silva has signed a sponsorship deal with Silver Star Casting Company for a clothing collection that will include a UFC 110 signature walkout tee for Spring 2010.

With the majority of his fights ending in knockouts or referee stoppage, Silva’s ruthless, street-fighting style has earned him the nickname “Axe Murderer” – a moniker and image that sits well with the edginess of the Silver Star brand.

“Silver Star is honored to be working with one of the most aggressive fighters in the sport,” says Silver Star president and CEO, Luke Burrett. “Wanderlei is a force to be reckoned with and always delivers fans an adrenaline -pumping fight.”

In this edition of Fight Gear Spotlight we look at fighters turned fashion models at this recent Cage Fashion MMA/UFC fashion show. Maybe you will see something you like for your next MMA clothing purchase. If nothing else you get to see Kim Couture in a mini-skirt.

In this edition of PRO MMA’s (promma.info) Fight Gear Spotlight we want to take a look at the MMA clothing company PROJEKT LABEL (www.projektlabel.com). Not only do they have a complete line of fresh designs and a large selection of men and women’s MMA apparel but they sponsor a whole team of fighters and have a great vision.

On the “Team” page of their website it reads, “Projekt Label takes mixed martial arts seriously. We sponsor professional, as well as up and coming fighters and put them in a position that will allow them to support themselves and pursue their dream of becoming an MMA superstar. Our goal is to not only build the best MMA team on the planet, but to also give back to the sport and help it progress.”

by: Jack Bratcher There’s a new article over at UFC.com that begins like this, “It’s a day many had hoped for.” Then they proceed to tell us what we’ve all been apparantly drooling over waiting for this great day to arrive. After joining together with some big-name companies to provide authentic UFC-licensed merchandise, we the … Read more