Tuesday night only means one thing and that is two plus hours of non stop regional mixed martial arts coverage. Tonight’s lineup includes some new professionals looking to make their mark in the XFC as well as a couple guys who aren’t known to hold their tongue. 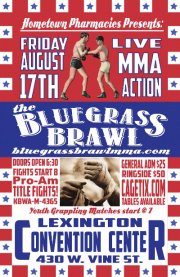 ProMMAnow.com is on location at Hardrock MMA 32 to provide viewers with live results and play-by-play for one of Kentucky’s longest running MMA promotions.

In spite of the show being scheduled on a holiday, a strong crowd came out to support some of the area’s top fighters. A number of area teams were represented including Reaction MMA and 4 Seasons. Special guest Shawn Thompkins was in the crowd and both Junie and Robbie Browning were seen in attendance as well.

Capped off with a Lightweight (amateur) title match between David Suter and Grady Self, the card featured a total of ten fights and one grappling match.

On October 31, 2009, ProMMA.info’s Brian Furby attended ICF 17 at Turfway Park in Florence, Ky. The ten-fight card was capped off by a pro match-up between Jim Davis and UFC veteran Dan Christison.