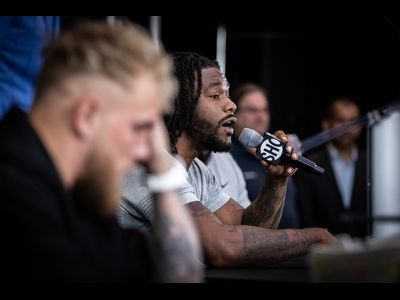 Hasim Rahman Jr is about to give YouTube menace turned freak show boxer Jake Paul his biggest test to date.

On August 6th, Rahman will take his 100 amateur bouts and 12-1 pro record in to the ring with him. His opponent, Paul has a record of 5-0 with one credible opponent to date and it was over an aging former UFC welterweight champion Tyron Woodley. Jake knocked Tyron out cold and all credit is due for that performance but he is about to face a real boxer in Hasim who just faced the undefeated son of Tommy Morrison, James for the WBC USNBC title. The experience level is night and day so it will likely come down to heart for Jake Paul to win and we have yet to see just how much of that he has. Rahman Jr replaced Tommy Fury who was arguably an easier fight for Paul so if there was ever a time for someone to drop some money to possibly see Jake knocked out – this would be it.

But there are some equalizers in place.

Hasim’s contract stipulates that he will lose 25 percent of his purse for every pound over 200. There is actually a rehydration clause preventing Rahman to recover no more than 10 pounds. This is likely because Jake has never weighed more than 192 pounds for any of his previous bouts. Rahman doesn’t seem phased by the clauses. “I agreed to all of this. because I know he can’t beat me“, Rahman said (via MMAJunkie.com).

When asked about Jake as a boxer he was brutally honest. His opinions are not only based on Jake’s past performances but on sparring sessions the two had in the past.

He puts the time in, he works very hard and is in very good condition. Even though the fighters he’s fought haven’t been boxers he’s still fighting grown men who are athletes…..So do I consider him a real fighter? I do. I just don’t consider him to be a very good fighter.

I knew from the first time we sparred that if he got hit, he wouldn’t just back down, which a lot of people do when they first get into boxing. He’s not a punk who gets hit and goes. You have to make him go. I’m going to make him go on Aug. 6

If Jake Paul beats Hasim Rahman Jr – does that finally make him a real boxer?