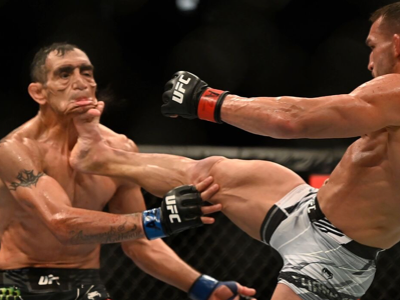 Tony Ferguson was on the receiving end of a terrifying knockout via a Michael Chandler front kick at UFC 274 this past Saturday. He remained unconscious for what seemed like an eternity but has thankfully recovered. Tony would issue a light hearted statement on social media reassuring fans he was doing okay (via The Mac Life).

I took a big kick to the dome this past Saturday inside that Octagon…It put me out for a long time. it was a scary feeling not remembering anything from the beginning of second round all the way until I walked up to the ambulance. I thank God every day I made the trip back to reality. All jokes aside, I didn’t mean to scare you all, should have done things different like keep my ”Hands up & Chin down”.

A knockout like that potentially ends a fighter’s career or at least signals the beginning of the end for some. Do you think Tony should retire?