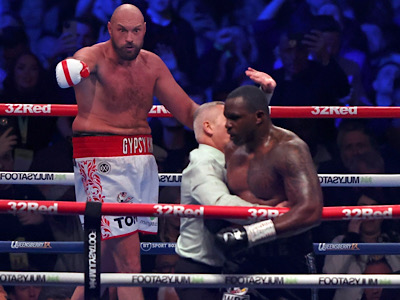 Tyson Fury may have retired but that hasn’t stopped Saturday’s vanquished opponent from trying to keep him from hanging his gloves up.

Fury successfully defended the WBC and The Ring Magazine titles against challenger Dillian Whyte on Saturday at Wembley Stadium in London. Tyson Fury stopped Whyte in the 6th round with one second left via a nasty uppercut. It was an impressive victory that noone questioned, had any problem with at all, and everything was fine. Obviously that was sarcasm because nothing is ever without criticism nowadays. It’s the criticism from Dillian Whyte that is the most surprising.

Whyte is claiming that the TKO was illegal. This seems to be the standard after losing to Fury. Former rival Deontay Wilder once claimed that his first loss to Tyson Fury was due to exhaustion from the weight of the costume he wore to the ring. They had a rematch and Fury knocked him out. It looks like Whyte is trying the same tactic to get his own return bout.

It is unlikely that Fury would postpone his announced retirement because of this accusation. A proposed crossover boxing match with UFC heavyweight champion Francis Ngannou seems to be the only thing that interests Fury right now.

A match with Anthony Joshua might lure him back, too.