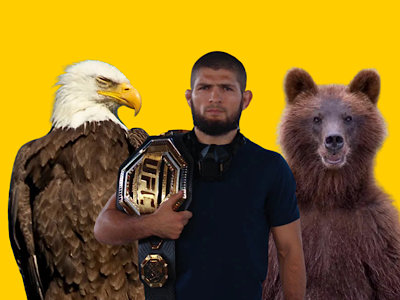 Shots fired. Eagle bear smesh, I repeat shots fired. Some people may think he is the greatest fighter of all time, but no one can refute the fact that former UFC lightweight champion Khabib Nurmagomedov doesn’t have a problem speaking his mind.

Nurmagomedov hasn’t been inactive since retiring from MMA undefeated. He has been on the media circuit promoting a new promotion he is spearheading called Eagle FC. He recently announced an exciting new 165 pound weight class that will feature former UFC fighter Kevin Lee and the Russian even put out an invite for former UFC lightweight title challenger, Dustin Poirier to join him.

There is a bit of buzz surrounding the organization and a lot of questions. One has already been answered. No girls allowed and not for the reason you think. Khabib believes there aren’t more than a handful of great female fighters in the world. Current UFC women’s bantamweight champion Juliana Pena is not one of them.

Here’s what he said at a recent press conference:

I am like, we can watch what Julianna Pena did with Amanda Nunes…but Julianna Pena, she’s not like greatness or something like that. She just beat Amanda Nunes like…We can watch and not many good fighters [referring to women] all around the world. There are only like five or six of them. And so we will wait and see.

Eventually he might cave but as of right now it looks like there will be not be another solid alternative for women to fight outside of the UFC.