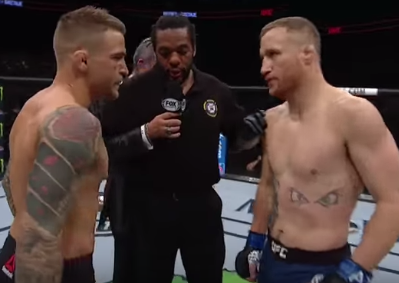 Former UFC interim lightweight champion Justin Gaethje is lobbying hard for a shot at current undisputed champ Charles Oliveira. Justin just defeated Michael Chandler in one of the most exciting bouts in lightweight history. While Chandler is now 1-2 in the UFC he remains one of the most respected and talented fighters in that weight class. It wouldn’t be difficult for Dana White to defend a Gaethje title shot next.

The list of established top contenders in the division is small right now. It is very reminiscent of the light heavyweight division when Chuck Liddell ruled over it. You would see the same faces in varying combinations all dancing around the championship. Whenever you have a situation like this it makes a clear contender a hard thing to come by. It comes down to how decisively one beat the other and more importantly… Timing.

Next up for champion Charles Oliveira is former UFC interim lightweight champ Dustin Poirier. Dustin just defeated Conor McGregor two times effectively putting the Irishman out of the title conversation for the time being. Michael Chandler who lost to Oliveira just lost to Justin Gaethje putting him out of the conversation for now. Islam Makhachev has looked really impressive in the fights he has had in the UFC but in truth he probably needs one or two more wins. The man in the middle is Beneil Dariush with one big win under his belt in Tony Ferguson. The point is that 155 pounds is kind of a mess right now. It could get even messier if one particular scenario happens.

Dustin Poirier could walk off in to the sunset after his fight with Charles Oliveira, win or lose. Should he manage to take the belt off Charles and then retire that would create an uncomfortable vacuum. Charles would likely immediately fight again for the belt with one of the other top contenders, most likely Justin but with UFC match makers you never know. There are a lot of moving parts and only time will tell what really happens.

Here is what Justin said about Dustin’s potential retirement and Poirier’s response.

Poirier winning and going on to face Gaethje in a rematch would be ideal in terms of marketing. The first go around was exciting but Gaethje’s once reckless, hard hitting striking style ended badly for him that night via a TKO loss. They both look more polished now and Gaethje still swings for the fences every other punch. It would be a fun rematch.