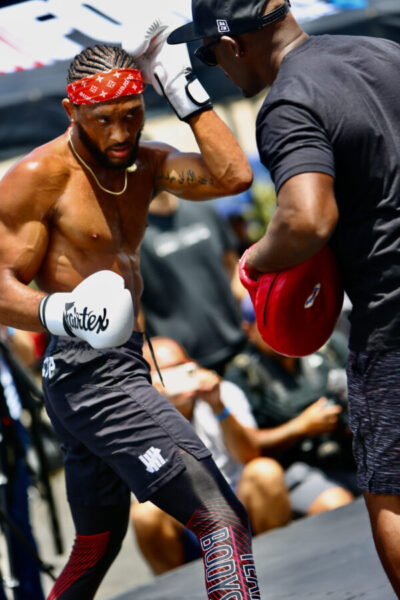 Hands down the long awaited Bellator fight of the decade has a scheduled date with history as Patricio Pitbull will defend his featherweight championship against AJ McKee in the finals of the Featherweight World Grand Prix on Saturday, July 31, 2021, at Bellator 263 at the Forum in Inglewood, California. On Thursday, Bellator two-division champ Patricio Pitbull who brought his son and A.J. McKee who brought his dog named ‘The Real Pitbull’ showcased their skills at their open workout for industry world media and faced off before their Bellator 263 featherweight Grand Prix.

The fight will air live on Showtime channel, and could conceivably determine one of the greatest featherweight battles in the world, not just exclusively for the Bellator brand. Pitbull is journeying on a seven-fight winning streak in retaining the featherweight title, won the lightweight belt and won three tough fights in a row. At the Grand Prix tournament, Pitbull punched his ticket to the finals by scoring an impressive decision win over tough Juan Archuleta, TKO’d Pedro Carvalho and submitted Emmanuel Sanchez, showcasing his diverse cache of deadly skills. “Pitbull” hasn’t lost in more than five years, through seven undefeated fights with a challenging curricula vitae as a fight resume. Today Pitbull is renowned as the poster boy of Bellator promotions.

As for the Mercenary AJ McKee, like good wine which gets better in time, the 145-pounder has become a very dangerous fighter who secured his final victories with a convincing eight second knockout over Georgi Karakhanyan, a submission win over Derek Campos, as well as defeating NCAA Champion Darrion Caldwell via a neck crank. In perfect fight form, “The Mercenary” has scripted and authored a perfect 17-0 mixed martial arts record and given birth to a career with all of his fights under the Bellator flagship. The McKee family has a history with Brazilian Fighters as 11 years ago on Sept 10, 2010, Antonio McKee TKO’d Luciano Azevedo in the first round at 3:11 at MFC 26 – Retribution. Today the prodigal son guided by his father and Coach has returned home to claim his destined title as the No. 1-ranked fighter in Bellator’s 145-pound division. He now has the chance to scribe the final chapter of his impressive 17-0 undefeated fight record with a plan to take out Pitbull making him the division and Grand Prix tournament champion, plus a $1 million dollar payout.

Mixed Martial Arts is a philosophical practice, with a mental game which references the intellectual maxim that “perception is reality.” The meaning of the quote is apropos for this fight with its fitting meaning, for what fighters perceive to be their reality is, in fact, their own reality. In an era which is ruled by political lies and fake news, where mass deception encounters mass delusion, Patricio Freire believes that the referees will not need to be involved in determining the match’s final outcome when the former Brazilian Chute Boxer enters the cage against the Mercenary A.J. McKee at Bellator 263.

“Pitbull” believes he will not only win the Grand Prix finals for the title, but he will also be victorious with style and content by forcing a submission of The Mercenary in the second round. When the media inquired further with intrigue outside of The Forum on Thursday, Pitbull who is Bellator’s double strap Champion of Champions declared his predictions through a conclusive response because, “He has a long neck.” With your neck on the line, this is the first Bellator fight card in the nation outside of the Mohegan Sun Arena in Connecticut since the COVD-19 pandemic with the encore of the Delta-Variant.

The Bellator event is expected to premiere to a sold out capacity crowd in Los Angeles, California. Let’s go to the Bellator 263 July 31st 2021 fight-card:

“Questioning our Kulture in Question..”