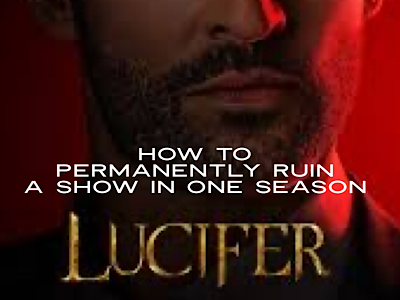 Lucifer season 5 is here and it was wild. I rewatched the series a few times in excitement and Spoilers ahead…I look back on how season three permanently tainted what was supposed to be a very special moment in season 5’s finale.

The season 3 love triangle was not a triangle. It was poorly written literary hell.

Fans appear to agree season 5 was fun but it was difficult for some of us to deal with the fact that it took 5 ½ seasons for Lucifer and Detective Decker to hookup. The painful third season almost ruined the series for us but some forgave it simply because Lucifer used his cool CGI wings to protect Decker, finally killed Pierce, and Decker learned who Lucifer really was. The stumbling block in rejoicing over season 5’s DeckerStar deal sealer was how in the third season Chloe shunned the devil.

She uncharacteristically slept with Pierce after only a few dates, ignored the romantic gestures and sacrifices Lucifer made over 2 ½ seasons, and even made a joke at a crime scene about how she and cardboard character Pierce “came together” before correcting herself that they arrived together. It was disgusting and left some viewers enraged.

Furthermore she fell in love with him? She agreed to marry him? Then, with almost no explanation, she has a lackluster and generic conversation with a random bus driver that suddenly made her not love Pierce anymore and caused her to cancel the wedding. She never renounced her love for Marcus…..

Once she admitted she loved the lieutenant it was over. Any future love admission to Lucifer was diminished because if she can love someone like Pierce in a very short period who did nothing to sacrifice for her and then have sex with him because he has a motorcycle and a beach blanket – yeah it was bad. Don’t worry the season gets worse and does more damage to the series overall.

Summary: Some of us lost all respect for her character and no longer had the same excitement for her and Lucifer to finally hook up. He took a knife for her and she asks Pierce to go to to a concert instead. WTF? Lucifer never loved anyone besides Chloe. No one else. He died and went to hell twice for her. Pierce showed her a little attention and she showed she was capable of loving even the lamest of men for very little in return. Loving Lucifer meant nothing now. And don’t give me the “true love” argument because it’s terrible.

Plus, how did Chloe not pick up that she was destroying Lucifer? How did she not see that having her own freaking prom set up wasn’t a sign of love? The bullet necklace gift being the only thing in his safe and the most thoughtful gift she will ever receive wasn’t a sign of love? Instead she fell in love for no reason and gave it up to a douchebag….I know I’m repeating myself but screw this season.

Lucifer killed his own brother to protect her. I hate this season so much.

Another character who pissed real DeckerStar fans off was one of my favorites, Ella. The one I would choose to hang out with and quite honestly live with. She is usually happy and in to whatever she is doing. What was unforgiveable here were her comments to an obviously agitated and dejected Lucifer. She started telling him multiple times how amazing Pierce and Decker were together and how he should imagine them getting busy and having babies. It was also rage inducing how the writers thought her stopping herself and suddenly saying DeckerStar was on another level was going to fix it. She quickly fell to the bottom portion of my favorite character list. She would never say anything like that to Lucifer knowing it would upset him given the fact that she was team Deckerstar from day one. She would never support Chloe and Pierce. Oh wait – she did.

Maze should have died

How was Mazikeen allowed to live? She betrayed Lucifer for the millionth time for some stupid reasons. She even set up the entire Angel of San Bernadino ridiculous episode that absolutely crushed Lucifer. I don’t care about their history before the series because the angel deception was unforgivable. Lucifer just sat there and took the backstabbing instead of incinerating her character that had zero redeeming qualities for most of season three. He truly loved Decker, Maze knew this, and she was trying to keep them apart in the worst ways possible. To argue differently in the context of what happened in the previous and superior seasons would be just fandom stupidity. Since then she has been mostly an angry source of comic relief.

Plus, there is no way a demon should be able to beat up the devil. No matter how good at fighting she is.

All of the above are definitely the reasons FOX cancelled the show. I don’t care what they said the reasons were. The DeckerStar will they / won’t they was broken almost to unsalvageable levels. Season three was so bad I was one of the fans ecstatic when Eve showed up in season 4. She loved him and even kissed his devil face. Now remember how bad Chloe was in season 3. Eve is looking pretty good now right?

It took almost the entirety of season 4 to forgive Decker’s character for what she did in season three but I hated her again when she was actually going to pour Father Kinley’s vial in to Lucifer’s drink during yet another loving and thoughtful gesture of his. She was truly going to send him back to hell if that glass hadn’t tipped over. In the end she could still barely look at his devil side just like in the season 3 finale. She was overjoyed when he returned to human form partially because the world wasn’t destroyed and mostly that Tom Ellis’s body was hot again. Think about that.

But wait you say! Didn’t she proclaim her love to Lucifer at the end of season 4? She had already told Pierce the same. A douche who as I said did nothing for her. She also never told Pierce verbally and confirm she didn’t actually love him. Checkmate.

I still love the show but they waited too long to pull the Deckerstar trigger and even then in season 5 it was a misfire. How they finally started a “relationship” was also truly lackluster so it was even less exciting. By the time Lucifer said I love you I no longer cared as much as I should.

How did season 3 get greenlit? I hate it so much. Did I mention that?