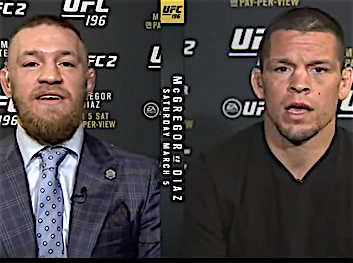 Conor McGregor’s invincible aura was removed by one Nate Diaz back at UFC 196 when Diaz submitted the Irishman. It was a shock to the system because at the time McGregor was the UFC featherweight champion on a dominant seven fight win streak. Six of those were via TKO/KO and all were impressive.

Diaz was 3-3 and despite being a fan favorite almost no one was giving him a real chance despite the fight being at welterweight. He proved them all wrong.

When the rematch happened at UFC 202 there were serious questions as to whether or not the first result was a fluke or was Conor simply outmatched? The fight was amazing and in case you haven’t seen it we won’t spoil the result for you. Watch it for free.