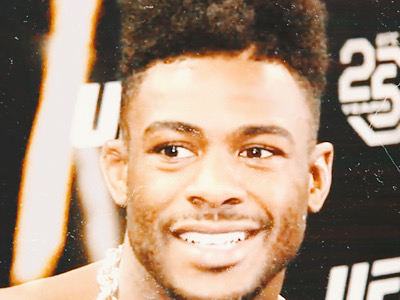 And NEW UFC bantamweight champion was what Aljamain Sterling hoped to hear after challenging for Petr Yan’s belt. He did but it wasn’t how he had hoped.

As the 4th round of their fight was drawing to a close Sterling was on his knees and Petr was moving forward. Instinctively Yan pounced but instead of some heavy punches he blasted Aljamain in the head with a knee. Knees are illegal to opponents who are considered grounded and even if it was a mistake – still against the rules.

Sterling was declared the winner by disqualification and the belt was placed around his waist. Unfortunately, there was no celebration from his camp because like anyone with a competitive drive he felt like he didn’t truly win it. He did no one no one can take that away from him. Still, there aren’t many photos of him celebrating or smiling wearing the belt out there.

Well…there was one and naturally Internet fans lost their mind so much that Sterling felt like he had to address it. (via ESPN MMA)

So like the BMF title its’s the BUB title?