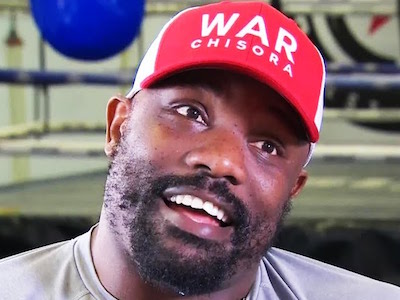 English heavyweight boxer Derek Chisora said before he took to the ring to fight Ukrainian Oleksandr Usyk that he was considering whether he should leave boxing for MMA. Over the years the 36-year-old has made no effort in hiding his desire to become an MMA fighter and leave boxing behind him for good. So, after 13 years in the boxing industry that has seen him contest 42 professional bouts, the Zimbabwean-born fighter looks more set than ever on swapping the ring for the octagon after losing to Usyk and having some undeniable truths driven home.

Indeed, the defeat to Usyk after 12 rounds of boxing that went down to the judges’ scorecard – who all ruled unanimously in the Ukrainian’s favour – was another reminder that Chisora may not have the engine to compete in the boxing heavyweight division anymore. Of course, it’s worth pointing out that Chisora wasn’t beaten up by Usyk or sent to the canvas once, he just simply couldn’t keep the onslaught going that he mounted on Usyk for the first four rounds.

It was during these early rounds that Usyk came under a barrage of punches that threatened to stop him in the initial phase of the contest. It was only down to the fact that Usyk was so fresh and therefore in a position to keep jumping out the way that meant he was able to see off the worst from Chisora. By the time the fifth round came, the English heavyweight was dead on his feet and unable to keep up the velocity of punches that originally pinned Usyk back.

From there the Ukrainian managed the fight well and outboxed Chisora without ever really hurting him. It does make you wonder how the fight would have ended up had Chisora been able to keep up his sustained pressure instead of falling away. Would a beaten down Usyk have been able to avoid being knocked out in the 11th or 12th given that haymakers late in the day are harder to stop when your arms feel like jelly?

Of course, none of that really matters now though as Usyk has seen off Chisora and earned himself a world-title fight against Anthony Joshua. At this stage, punters knowledgeable who are reading this will point out that Joshua has to beat Bulgarian Kubrat Pulev to face Usyk and that is of course correct. But at just 1/12 in the latest boxing betting to do so, you’d have to conclude that it looks a done deal that will happen.

But what about Chisora’s future after the loss? Well, the truth is that the English boxer is not in a position where he can negotiate a blockbuster bout anymore after losing, and will instead have to rely on his promoters to work their magic by getting him a fight. After all, the loss to Usyk comes on the back of a fairly recent one to Dillian Whyte, on that occasion, Chisora was brutally knocked out. As mentioned, Chisora’s stock isn’t the highest it has ever been, but he can still be successful and the main attraction on fight night.

That is if the 36-year-old decides on making the switch to MMA. Indeed, a frenzy of attention follows anytime a world-renowned boxer makes the jump from boxing to MMA. What’s more, is that Chisora will be far more competitive in the octagon as the fights only last a maximum of five rounds instead of the 12 he is accustomed to. That should enable him to be explosive from the start and land more punches as his opponents will also be pressed for time and therefore a lot more carefree with their defence.

And should one of Chisora’s haymakers land, without the protection of a boxing glove, you can be certain it will be goodnight for the majority of his MMA opponents.

We may have seen Derek Chisora’s boxing career somewhat fizzle out but should he stay true to his word and become an MMA fighter, then we will see the man they call Del Boy rain down hellfire on his opponents once more