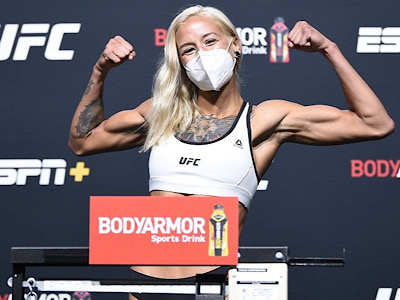 Let’s hope this is one of those “when you lose, don’t lose the lesson“ situations.

Shana Dobson was a massive underdog heading in to her fight with Mariya Agapova on August 22nd. Agapova was at -1429 and Dobson was at +800. That is not a typo those were the odds so when Dobson finished Agapova at 1:38 of the second round jaws were on the floor. Adding to the shock was the fact that Mariya was on a three fight win streak and Shana was on a three fight skid. Looking at the situation as a whole really puts in to perspective how unpredictable mixed martial arts fights are.

Agapova posted an update on Instagram along with a clip of the defeat. She said she “ran out of gas and the referee suddenly stopped the fight” which may be true but nothing can be taken away from the heart, determination, and ferocity of Dobson on display that night. She also said she did not consider the outcome a true loss. Check out all of what she wrote below.