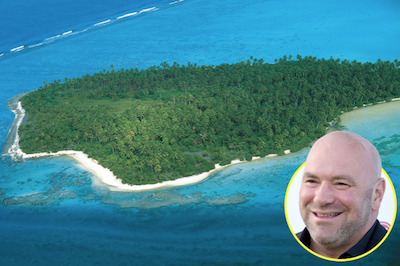 Dana White may have kept his cards close to his chest about Fight Island to attract mass appeal, but it has since been revealed that fights will take place inside an arena and controlled environment with arguably one of the best fight cards of the year in the opening event: UFC 251.

The UFC announced Fight Island is actually Yas Island in Abu Dhabi, a manmade island on which the UFC has previously held events, with the fights taking place in an arena and a beach Octagon being used for training and promotional purposes. With temperatures likely to be in the 90s and 100s in the peak periods of the day during Abu Dhabi’s summer months, it perhaps is understandable as to why an unknown arena has been chosen.

Yas Island has held numerous sporting events over the years and is the home of the Formula 1 Abu Dhabi Grand Prix. Warner Bros World, Ferrari World, Yas WaterWorld and Yas Marina Circuit are all located on the island, as well.

The first event on Yas Island was UFC 251 which was held on July 11. The promotion will also hold Fight Night events on July 15, 18 and 25. Following those four dates, the UFC returns to the United States for a pair of announced cards, including UFC 252, which will be headlined by a heavyweight championship fight between Stipe Miocic and Daniel Cormier. For those that like to put a wager on the action, USLeaguesBetting can help find the best odds.

Results of UFC 251, which were not without their controversies and questions about the judges and ability of the referees in some fights, were as follows:

These are just some of the other bouts that fans can look forward to witnessing:

There is no doubt that UFC 251 was a major success for White and the promotion across the world as Fight Island certainly appeared to pay off for the company. According to figures released, the sporting event managed to bring in 1.3million pay-per-view buys during the lockdown period being experienced across the globe.

With that number of buys, reports have claimed that the PPV immediately ranked as the number 6 event on the all-time list, tying with Conor McGregor’s bout with Eddie Alvarez in 2016.