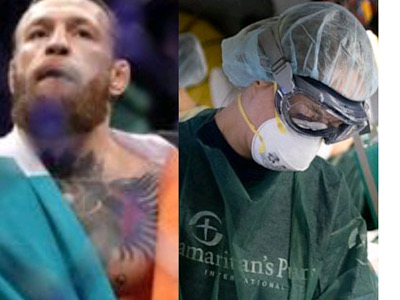 For those of you who don’t keep up with Conor McGregor on social media we think you probably know that this isn’t the first time he’s donated money to help in situations like this. The former UFC featherweight and lightweight champion has quietly donated to worthy causes on many occasions that the public only found out about through someone else’s social media thread somewhere. The point we’re trying to make is that he has a big heart to go along with that big wallet. The coronavirus pandemic is a big danger to everyone’s health which makes this donation that much more important

Believe it or not I actually saw a few people on Twitter flaming the Irishman claiming this was a publicity stunt. One million euros is a lot of money even to Conor McGregor. This donation is to help the country and it’s people that he loves so much. He loved it when he was broke and he still loves it now that he’s rich. It’s not a publicity stunt you trolls.

Conor quietly messaged the Irish Minister for Finance that he would be donating €1M to Irish healthcare professionals in the most affected areas. It was the Minister himself that made it public knowledge likely in an effort to boost Irish morale. The country currently has a reported 1564 active coronavirus cases and 9 total confirmed deaths. Thanks to overzealous consumers there is a shortage on sanitizer, facemasks, gloves, and other general use healthcare items they are desperately in need of at hospitals.

This is a historic time for the world and one in which we hope everyone stays safe.