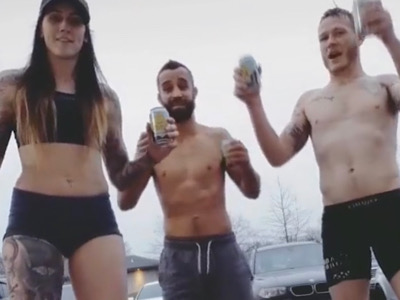 UFC featherweight Megan Anderson is probably the closest thing the UFC has to an Amazon Warrior. At 6 feet tall she is an imposing 145 pound fighter because – keeping it real – to be that height and weight combo means you are in peak physical condition. It’s probably terrifying standing across the cage from her. Beautiful, funny, and deadly.

So when we saw this video she shared we thought two things. Megan would be fun to party with and her aim with her fists is better when they don’t have beer cans in them.

On March 16th, in celebration of Stone Cold Steve Austin Day she and a few friends attempted to duplicate his double beer guzzling celebration. Not so much. Just watch.